Board shows support for $3.95 million boost 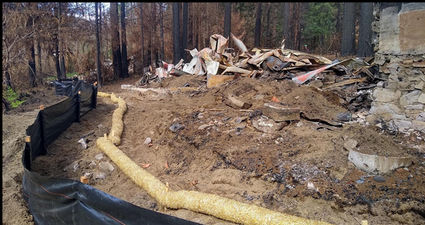 EUGENE: Karl Morgenstern had some good news when he reported to the Eugene Water & Electric Board on February 2nd. “The impacts were not as great as we originally thought, given the conditions we were facing,” the utility’s watershed restoration manager said.

EWEB has been monitoring water quality because of concerns that storm runoff from the Holiday Farm  Fire would contain increased quantities of metals, nutrients, solids bacteria and carbon, Morgenstern said. “Even though we were seeing upticks during storms they are well below any health based criteria.”

During EWEB’s initial re-sponse efforts, $1 million had been allocated to not only assess damages but also to design and install debris and erosion control measures.

During the meeting, the utility’s staff outlined their request for an additional $3.95 million as an amendment to the upcoming 2021 budget.

Some $2.25 million of that money would be spent on what had been identified as high risk concerns. They included ways to reduce erosion in badly burned zones like around Gate and Quartz creeks as well as the Finn Rock area. Also targeted, the staff said, will be efforts to incentivize “smarter building along the river.”

A second phase of the proposal calls for restoration of the floodplain to spread out flows, while causing sediment to drop out and absorb carbon. That would has an estimated cost of $1.55 million.

The third, and smallest part of the plan, would address strategic planning for around $15,000.

One large issue to overcome in restoration efforts, Morgenstern said, was an expected shortage of seedlings over the next three to four years. He suggested the utility should pursue gaining control of large tracts, “that we could then reforest and turn into conservation zones” through either acquisition or conservation easements.

That approach made sense to board member John Brown who said he was all for acquiring some of the at-risk properties and maybe, “Throwing a deed restriction on it or just selling it to the adjacent owner and saying they can keep it for open space but they can’t improve it.”

Brown thought the utility could probably come up with some creative ways, “To acquire real estate by finding opportunities to help people financially and the community and the watershed.”

Overall, Brown said he would support a proposal that could, “Take 10 or 20 septic tanks away from that river.....once they’re rebuilt they’re there for 50 or 100 years.”

Other board members also said they would back the proposed budget amendment, with none dissenting. No decisions were made on the amendment, which will expected to be on next month’s agenda.

EWEB general manager Frank Lawson said a proposed surcharge on water customer could average $3 per month and be in effect for the next three to five years. Extending it any longer, Lawson said, would involve going through the rate change process.

“We will be back in June regardless with the long term financial plan and its impacts going forward,” Lawson said.

Image: With initial measures to protect critical streambanks from erosion completed, the Eugene Water & Electric Board is planning to move ahead with a five-year recovery plan for fire stricken sections of the McKenzie Valley.