Cougar Dam is a model 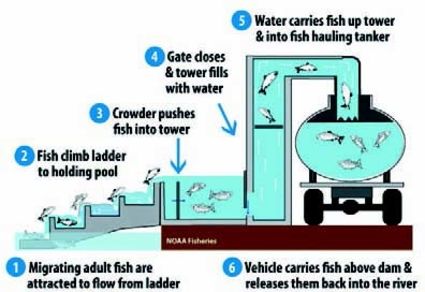 A strategy for boosting salmon and steelhead numbers in the Columbia/Snake river basins supported by the Northwest Power and Conservation Council in its Fish and Wildlife Program, as well as by Northwest Tribes, is to reintroduce the fish into habitats where salmonids once existed historically but are now blocked by high head dams. Known as trap and haul, capturing fish below a dam and transporting them into, hopefully pristine habitat upstream, is one mechanism for expanding salmonids' ranges.

Trap and haul is one of few options available to restore anadromous fish populations upstream of major migration barriers, such as high head dams. In many rivers, the best available cool water habitat for spawning and rearing is located upstream of impassable dams and trap-and-haul can be an important management tool if climate change predictions are realized, according to a recent review of existing trap and haul programs.

For example, the McKenzie River program for spring chinook (the river sports the most abundant population of the fish in the Willamette system), access to historical habitat is blocked by Blue River Dam, Cougar Dam (South Fork) and Trail Bridge Dam. All were built in the 1960s and a trap and haul program began in 1993. That program moves fish upstream of Cougar and Trail Bridge dams.

A surface collector to collect downstream juvenile migrants was built in the Cougar Dam forebay in 2014, but it collected few fish and has been abandoned after two years. A larger surface collector is in the design stage, the review says.

Reintroduction of natural origin spring chinook at Trail Bridge Dam has not begun.

Another example is the Middle Fork Willamette River where adult trapping occurs at Dexter Dam, the most downstream of Middle Fork dams, with releases in various tributaries upstream. Middle Fork reservoirs have high growth opportunities for juvenile salmonids but contain large populations of predatory fishes and so juvenile mortality rates can be high. Juvenile chinook primarily pass dams during fall and winter months when reservoir elevations are relatively low and deep water passage routes are available at the dams, though passage mortality through these routes can be quite high, the review says.