Local businesses given a boost 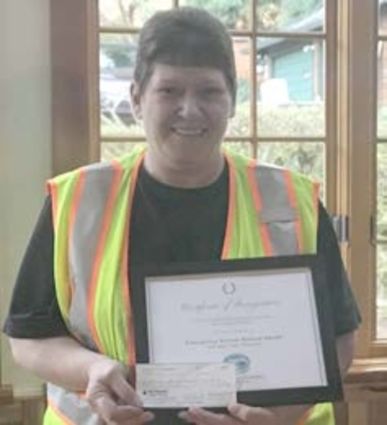 Seven businesses nominated by community members and the McKenzie River Chamber of Commerce have been recognized for the help they freely gave after September’s Holiday Farm Wildfire. $500 checks were give to five businesses:

McKenzie Feed & Tackle owners Chris and Michelle Wright were nominated by Fire Chief, Darin Bucich. Darin said “once we felt we had control of the fire, at least around the houses, I assigned several of my crews to access the needs of the homes that had to be evacuated. We quickly realized that there were a lot of farm animals left behind that needed food. The McKenzie Feed Store basically opened their doors and gave us what we needed so we could feed hundreds of chickens, cows, pigs etc. for several weeks.” Chris and employee Erika are shown in the photo.

Mickey Sullivan of McKenzie Valley Pump was nominated by Cora Lee Morissey. Cora Lee said that Mickey lost everything in the fire and MVP owner Ted West lost his shop and tools, and yet they were still working to help everyone on the river. She said she could not thank them enough for their wonderful attitudes and incredible work ethics. Mickey was also nominated by several other community members for volunteering many hours to help those in need.

Taya Brock, and Daniel, of Takoda’s Restaurant provided many meals and support for the first responders and fire fighters during the wildfire.

Emergency Animal Rescue Squad, Toni Ray, played a role in getting displaced animals reunited with their owners, and still are, two were reunited recently.

Brian and Kellie Cline of the Vida Cafe were recommended for providing services, meals and support during the Holiday Farm wildfire.

Alyssa Brownlee of Horse Creek Lodge. Alyssa took an active leadership role in helping the community immediately after the fire. She housed first responders and people who lost their homes.

Happy Dahlme, Everyone’s Market in Vida for providing services, goods, support and staying open to help with the gas and propane needs for the community and first responders.