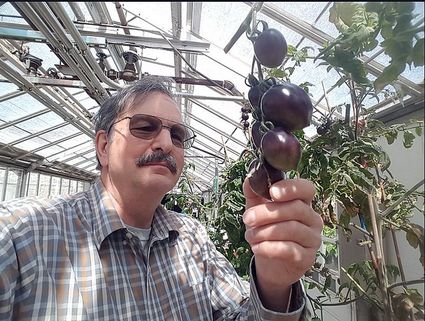 Indigo Rose was bred by Jim Myers, vegetable breeder and professor in the OSU College of Agricultural Sciences. Midnight Roma is the result of crossing Oregon Star, a big, fleshy tomato good for slicing or paste with excellent flavor, and Indigo Rose, a dark purple tomato that contains anthocyanins, the same healthy antioxidants found in blueberries. Both varieties were also developed at. OSU.

"We were selecting for a really dark Indigo-type processing tomato," Myers said. "Ultimately, we got a really nice one. Anybody into home canning would be interested. Chefs like it for making sauces. Right now, Serious Pie in Seattle is using Midnight Roma to make pizza sauce."

Row 7 Seed Co. in Tarrytown, N.Y., which has exclusive rights on Midnight Roma, is selling seed online. Co-founder Dan Barber, who has about 300,000 followers on Instagram, featured it on the social media platform and received more than 22,000 likes.

For Midnight Roma, Myers concentrated on flavor and disease resistance, coming up with a better-tasting tomato than many other paste tomatoes. It also is resistant to verticillium wilt. The plant is a semi-determinate variety, meaning the tomatoes tend to ripen at about the same time, making it timely for preserving. The anthocyanins are contained in the dark skin. So, to keep the antioxidants, the skin must be included in processing. Myers suggests running the sauce in a blender or food processor and then pressing it through a sieve, which he has done with success.

Indigo Rose caused a stir when it was introduced in 2011. The health benefits of antioxidants had become widely known and the first purple tomato was noteworthy. But because nothing like it had come to market before, home gardeners were unsure when to harvest and tended to pick too early. As additional information emerged, people became familiar with the tomato's color change from shiny blue-purple to a dull purple-brown with the bottom turning from green to red.

Midnight Roma darkens in the same way, and sunlight is key to getting purple skin, which contains the anthocyanins, Myers said. To achieve the highest level of antioxidants, use a trellis and prune excess leaves to allow the maximum amount of sun to reach the tomatoes.

In between developing Indigo Rose and Midnight Roma, Myers introduced Indigo Cherry Drops, Indigo Pear Drops and Indigo Kiwi, all of which are readily available on the market except Kiwi. Breeding is a years-long, painstaking process of taking pollen from the male stamen to brush on the female style by hand. For each generation, he chooses the best and repeats the process until he produces a tomato up to his standards.

One of the parents for Indigo Rose that led to its purple, anthocyanin-rich skin was an experimental variety with wild tomato genes discovered by Carl Jones, a then OSU graduate student who was examining plants in a special collection at the University of California, Davis, that is part of the U.S. Department of Agriculture's National Plant Germplasm System. At that point, the health benefits of antioxidants weren't commonly known and other breeders weren't working on a marketable purple tomato. Now Indigo Rose is used to develop additional lines, Myers said.

"While other fruits, such as blueberries, have higher concentrations of anthocyanin, tomatoes are consumed practically daily in the United States," Myers said. "The tomato is the nation's most popular vegetable unless you count potatoes."