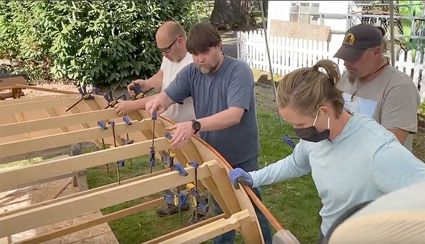 LEABURG LAKE: After five days of helping build a McKenzie River drift boat, Tom Clawson says he still has a steep learning curve ahead. He tells people he expects it will be, “Like learning to drive, but in a Ferrari.”

It’s not that Tom is unfamiliar with maneuvering his way through stretches of whitewater. After all, he’s been a professional river guide for 25 years. The difference is his prior time came at the oars of larger inflatable rafts.

He, like the others who signed up for Oregon master dory builder Jayson Hayes’ boat building class, now know a lot about subtle design changes that evolved from the first lightweight board and batten boat that showed up in the 1920’s. What they created this April was a wooden boat that’s big enough to easily handle two anglers and the gear of a pro guide but also small enough to manage any shallow water or narrow passageways it might encounter.

“I haven’t ever had a drift boat but having built one conjures up thoughts of having one yourself,” admits Kirk Wright. A survivor of the Holiday Farm Fire who lost his home on Angels Flight Road, Kirk said that when a chance came up for him to take the class he decided, “I felt I needed that, for sure.”

A builder himself, Kirk said taking the class meant he had to delay a few jobs on his schedule. “I was at a spot in my life where it was something I’d like to do and it was a last minute opportunity when some people dropped out.”

He’s glad he did. “It’s a really fun class and Jayson’s a hell of a builder,” Kirk said. Part of what he liked was the steaming process to coax wood into conforming “right along the frame of the boat.” Also gaining high marks from him was the solid construction that used numerous screws and bolts, as well as Jayson’s expert ability to finely fit pieces cut with a Japanese saw.

Tom, who celebrated his birthday the week of the class, won the opportunity to take the boat home with him. Before putting it in the water he plans to donate it to be used again in a session Jayson’s planned where students can learn how to apply finishes to wooden boats.

Both Tom and Kirk said they’d highly recommend the boat building class to anyone else considering signing up for the next one, scheduled for November 1st to 5th. It will be limited to nine people and the tuition is $800. For more information, go to: hayescustomboats.com.