Lane Electric and EWEB blamed for failure to turn off power 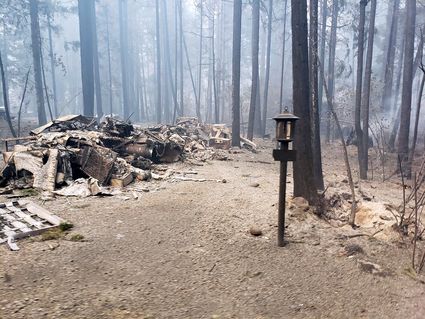 In their 55-page complaint, the Salem Fire Lawyers group asks for $102,544,945 in restitution based on individual property losses ranging from $250,000 to $2.5 million, as well as twice the costs of reforestation, replacement, and other restoration efforts.

The Lane County Circuit Court filing alleges the utilities failed to de-energize their circuits on the day of the fire, despite Red Flag Warnings and forecasts for dangerous fire weather, including high winds and single-digit relative humidity.

Details of the suit include charges of negligence by EWEB and the Coop, "When each knew or should have known hazardous conditions existed in and around their power distribution systems and within the Holiday Farm Fire area that caused the area to be highly susceptible to the start and spread of wildfires."

Parts of the negligence claims involve, "The absence of wildfires in the area during the preceding decades contributing to an abnormally high fuel load consisting of dry trees, underbrush, grass, and other highly flammable organic matter."

The lawyers also cite, "Phone calls and reports hours before the fires began informing Defendants of high wind, falling trees, sparking power lines, and/or other dangerous conditions at or near their power distribution systems."

Energized conductors coming into contact with tree branches are blamed for igniting the fire between mileposts 47 and 43.5 of the McKenzie Highway.

"The Holiday Farm Fire devastated our clients' homes, timber, and businesses. It was a life-altering event for our clients", said Rick Klingbeil, a Portland attorney with Salem Fire Lawyers.

"Lane Electric is fully committed to understanding the cause of the fire, which is currently under investigation," Debi Wilson, General Manager of Lane Electric, said in response to the suit. "We are cooperating with federal and state authorities and are unaware that any of our assets contributed to the cause of the fire at this time. A thorough investigation will take time and patience."

Utility spokesman Joe Har-wood noted that "EWEB's deepest sympathies go out to all the residents of the McKenzie River Valley. We take wildfire prevention seriously and our systems are designed to ensure the safety of our community."

Harwood went on to note that, "In early September 2020, EWEB took strong and proactive measures in preparation for a potential wildfire."

The lawsuit filed in Lane County Circuit Court, he said. "Contains claims against EWEB that are based upon a significant factual error: In fact, as designed, EWEB's lines in the Holiday Farm area de-energized automatically several hours before the Holiday Farm Fire ignited on the evening of September 7, 2020."

Like Lane Electric, EWEB says it, "Will continue to cooperate with any ongoing investigations of the cause of this tragic event. As a customer-owned utility, EWEB is dedicated to truth, transparency, and accountability."

Harwood said, "EWEB is committed to being a strong and compassionate partner in the rebuilding and recovery from the Holiday Farm Fire."

Attorneys Robertson and Curtis say they represent approximately 2,000 victims of California wildfires in lawsuits against electric utilities, including the deadly 2017 Thomas Fire and 2018 Woolsey Fire.