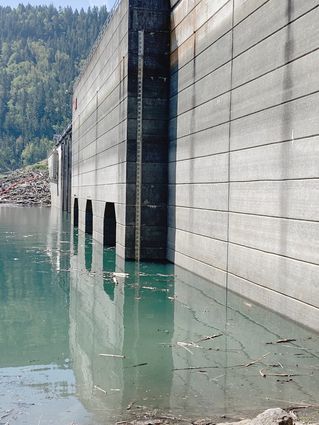 U.S. Army Corps of Engineers dams are likely to be at lower levels this summer.

Monthly estimates of available water supply in the Columbia River basin are continuing to drop after a month of record low rainfall in April.

Eugene, Portland, and Lewiston, ID, all recorded their driest April on record, according to National Oceanic and Atmospheric Administration. And, in some basin areas, May is also on track for near-record low precipitation.

Meanwhile, remaining snowpack across the region is a mixed bag, with much of the region under drought conditions, yet with some northern Cascade snowpacks over 100 percent of normal this time of year.

As warm, dry weather continues, the U.S. Army Corps of Engineers, Portland District is reporting a worsening water year as it strives to refill 13 Willamette Valley reservoirs for the upcoming recreation season.

The Willamette Valley Project "depends on spring and early summer rainfall to refill and lack of precipitation is making it difficult to fill multiple reservoirs. To help explain the situation, Corps staff will host a virtual public information session, Thursday, May 20th from noon to 1 p.m.

The Corps invites the public to attend the session to learn more about current operations, future forecasts and potential impacts to the Willamette Valley System.

The Corps encourages questions but asks participants to send any questions in through the "chat" function in the WebEx during the call.

The year-to-date precipitation across the Willamette was 76% of normal, as of May 17. The snowpack is 51% of median for the Willamette. Snowmelt helps keep reservoir elevations up in the summer if it lasts and matches outflows – but it only accounts for roughly 10% of the system's storage.