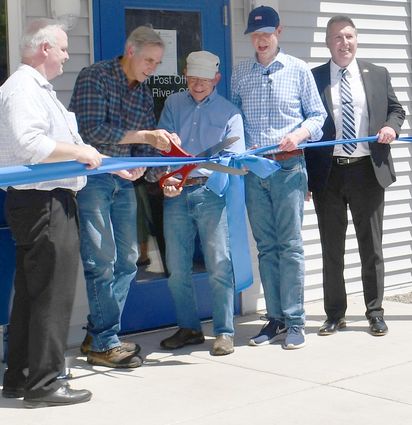 BLUE RIVER: "Today is truly a special delivery day for Blue River. And in true Oregon fashion, it doesn't happen by osmosis." With those introductory words Ron Wyden went on to congratulate both community members and the U.S. Postal Service, saying he, "Put my stamp of approval on this very special occasion."

Also speaking from the dais was Senator Jeff Merkely, who referred to the rebuilt building as, "A high point like today, gathered together and like a phoenix out of the ashes, we have this new Post Office here. Let's give a cheer and a little applause to everybody who helped make this happen."

"It's been far, far too long since I've been inside a brand new Post Office," was the way 4th District Congressman Peter DeFazio explained his feelings. He went on to criticize the way the previous administration had impacted the country's mail service, particularly in rural areas, saying it felt like they wanted to, "Take delivery times back to before the Continental Congress."

"Rural post offices have been the heart of our communities," according to East Lane County Commissioner Heather Buch.

Buch referred to the new building as "a bright spot in our community now," adding that, "It shows how we can redevelop here." She pledged to support efforts to "build back stronger and better and make sure this community comes back to life."

In his comments, U.S. Postal Service District Manager William Schwartz noted that, "Along with our postmaster and his staff, we quickly initiated an emergency action plan, ensuring services and delivery for the community. In fact, we were providing some rural in mailbox delivery the very next day after the fire." He also presented McKenzie Schools Superintendent Lane Tomkins with a plaque in appreciation for Tomkins agreeing to open a temporary post office at the school before the new building was ready.