Prisoner escaped by back door during conjugal visit 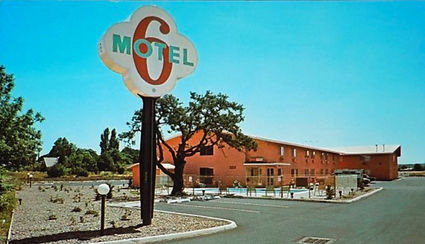 The Motel 6 on Mission Street in Salem, which Carl Cletus Bowles escaped from by walking out the back door during a conjugal visit while a prison guard watched the front.

It was a few minutes after midnight on May 17, 1974, and the Oregon State Penitentiary employee sitting in his car outside the Salem Motel 6 was starting to get nervous.

He was there to supervise a conjugal visit between a convicted cop killer named Carl Cletus Bowles and his fiancée, Joan Coberly, and the convict was supposed to have returned to the parking lot by midnight.

He walked up to room 30, knocked on the door. No response.

He went down and used the lobby telephone to call the room. No answer.

Finally, the manager let him inside, and he found the room empty - really empty. The bed hadn't even been sat on; the toilet still had a strip of paper over it. Bowles and his "fiancée" were gone - long gone. They had, it turned out, simply walked out the back door of the motel.

It was a jailbreak. And it was quite possibly the most embarrassing jailbreak in U.S. history.

Bowles was a small, handsome man, charismatic and, before his prison days, something of a ladies' man. He'd gotten into trouble early, before he was a teenager even, and by his late teens he was doing hard time for larceny.

In the mid-1960s, on the run from the law after robbing a bank in Portland just a few days after his release from prison, he gunned down a deputy sheriff in Springfield at close range and in cold blood. It was this murder that he was in prison for at the time of his escape.

Despite the gravity of this crime and the life sentence it had drawn, prison superintendent Hoyt Cupp knew Bowles would eventually be released - probably at his next Parole Board hearing in 1982. So he was thinking about ways to encourage Bowles to reform himself, so that when he was released, he'd behave this time. To encourage this, Cupp thought a "social pass" - that is, a conjugal visit - would give Bowles a "ray of hope" and encourage him to rehabilitate himself.

Bowles had been at some pains to charm Cupp, and his campaign had worked; Cupp had taken a personal interest in helping this seemingly compliant, positive prisoner to move beyond his sordid past.

Now, it seemed, it had all been an elaborate con. Joan Coberly, as it turned out, was actually Bowles' niece, not his girlfriend. She'd been making visits to the pen posing as his girlfriend, apparently for the express purpose of figuring out a way to bust him out.

This came as a surprise, but it shouldn't have. A teletype letter had come into the state pen six months earlier - just a few weeks after Coberly's first visit - from a detective in Amarillo, Texas, warning that Coberly was planning to break Bowles out. Cupp claimed he never saw the letter, and, well, maybe he didn't.

As state and federal law enforcement agencies swung into action, the eyes of everyone were on Hoyt Cupp. What on Earth had he been thinking, people wondered? Why was a man who was doing a life sentence for murdering a cop, who wasn't even eligible for parole for another eight years, getting escorted to a motel room for sex? Wasn't that a bit irresponsible, given what often happens nine months after such an encounter? Why didn't the prison authorities check to see if the Motel 6 had more than one exit? And most of all, why was that Teletype letter ignored?

Governor Tom McCall, who had appointed Cupp and had great faith in him, docked his pay by $1,000 and suspended him for two weeks. Cupp offered his resignation, and McCall refused to accept it - but told him if anyone was hurt before Bowles was recaptured, that would probably change.

Meanwhile, Bowles and Coberly were down in the hills near Eugene, hiding out - first camping, later in a commune, and after that on the property of a well-intentioned acquaintance. But authorities had tracked them down, and soon moved in.

When FBI agents arrived, Bowles managed to get the drop on them. He shot at an FBI agent at point-blank range and missed, causing the agent to drop his pistol and scramble for cover; Bowles then fled the scene with the stolen gun. Then he went to the nearby home of Earl and Vi Hunter, took the couple hostage, and left town with them in their car.

The felon then picked up where he'd left off the last time he was on the lam, taking hostages and hijacking cars and just wandering around the west, apparently with no idea what to do.

Eventually, he wound up in the Spokane area, where officers soon found themselves responding to complaints of a man hijacking cars and motorcycles at gunpoint. They found him and chased him into the Spokane River, where, waist deep in the water, he tried to get a shot off at a cop who already had him in his sights. The cop shot him in the stomach.

Back to the Big House

Surgeons worked for hours to save Bowles' life and were successful. And authorities badly wanted to talk to him. All the hostages he'd taken were alive and accounted for except two - the Hunters, the couple he'd kidnapped in Eugene. What had happened to them?

Bowles said he released them in Yakima. The cops knew, with that sense that people develop when they're lied to a lot, that he was lying. And this, of course, they found very alarming.

Finally, their bodies were found, about 20 miles south of Spokane in a rural area. It was now official: The penitentiary's carelessness had cost two innocent lives.

In the months that followed, a number of voices called for Cupp's head to roll. However, Governor McCall decided not to fire him; he served as superintendent there for another 10 years before being promoted to a central administrative position and retired in 1986.

But Bowles' case had a significant impact on many Oregonians' views on crime-and-punishment issues, especially regarding the death penalty. If anyone deserved the death penalty, it was Bowles, and they found it frustrating that the law wouldn't allow it to be applied. They also found it scary that a man like Bowles had been just a few years away from being paroled. And they felt that the state prison should be more focused on protecting innocent people outside its walls than rehabilitating those within. 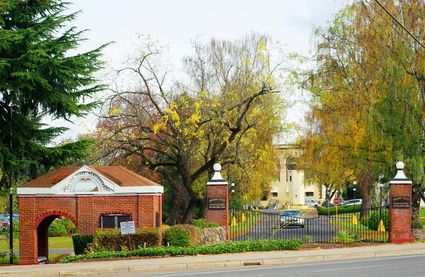 The formal entry gates at the Oregon State Penitentiary..

Even among folks who didn't agree with that assessment, there was a noticeable hardening of attitudes toward convicts just after this happened. In a 1964 referendum, Oregonians overwhelmingly voted to abolish the death penalty; in 1978, they overwhelmingly changed their minds. This dramatic change was probably at least partly because of this case.

One thing is for sure: Conjugal visits got a whole lot more difficult to arrange in the years that followed.