Rate increase may be coming 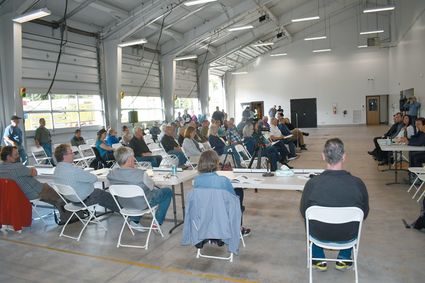 People turned out for the area's first mask-free public meeting in over a year, held in the truck bay of the Leaburg Fire Station.

LEABURG: Utility rates and the fate of a dewatered canal proved to be on the minds of people who showed up for last Wednesday's Eugene Water & Electric Board meeting. Answers to the questions they asked may take some time.

Water was drained from the Leaburg canal in late 2018. According to the Federal Energy Regulatory Commission, it can't be refilled until safety-related leaks are repaired.

"Based on cost estimates it's abundantly clear that the investment required in terms of canal improvements will substantially exceed what we would get back in power generation," according to Lisa Krentz, the utility's generation manager.

Some people had water rights from the canal to irrigate their land. Richard Tracy of Leaburg said not getting water for his crops was particularly hard to take because the canal still has six to seven feet of water still in it.

"Four or five years ago, EWEB decided they wanted to give us water off the top of the canal," he said. Before that time a drain at the bottom of the channel was used. But now the water is too low to draw from the top.

EWEB's generation engineering supervisor, Mark Zinniker, said a combination of factors, including the need to frequently clean the drain and dam safety caused the change.

Tracy isn't alone. There are about 25 other property owners with water rights. They amount to, "One of the significant impacts whether EWEB returns to generation or not. Those factors could factor into future canal considerations," Zinniker said.

Frank Lawson gave an update on a cost of service analysis EWEB had done that had shown it was costing about 14 percent more to provide electrical service to its McKenzie Valley customers. When the study was brought to the board after the Holiday Farm Fire they decided to table it.

With a system-wide study up for review, the board is expected to decide on possible rate increases, including one for the McKenzie Valley, between October and December. Lawson said people should expect at least two public hearings, as well as an initial proposal meeting in August.

Questioning a 14 percent rate increase was Dana Burwell, who wanted to know if local residents were being charged maintenance costs for the canals or whether it was spread through the utility's customer base.

Lawson said those costs were spread like "peanut butter." In addition, he gave some more details on the costs involved to either decommission the canal or repair it to the point where it would again generate power.

Lawson said to make the canal safe to deal with runoff from tributary streams that feed into it, EWEB could make repairs in areas where leakage has been pinpointed. Those costs, he said, could range from $20 to $35 million. Starting up power generation again would require rebuilding the entire canal for another $20 to $35 million, he said.

Questioning if either option was less expensive was Eric Clark. "Decommissioning the canal will likely lead to follow on costs," he cautioned, saying that there was a potential it could lead to decommissioning Leaburg Dam, which would be, "substantially higher than restoring the canal to service."

Those thoughts echoing what Burwell also said when he noted also favored bringing the generators back online. "We're not producing more powerplants and electric cars are going to eat up a lot more," he said. "In the future we're going to see the costs swing more toward opening it back up," he predicted.