Oregon's most famous elephant led a colorful and tragic life 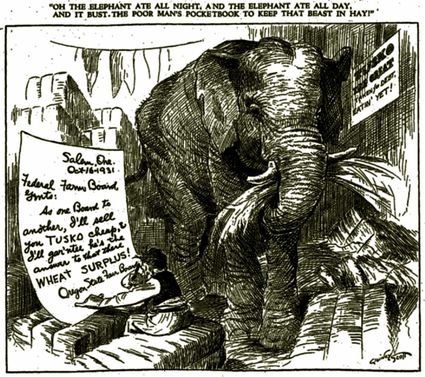 This cartoon ran on the front page of the Portland Morning Oregonian on Oct. 16, 1931, commenting on the state's dilemma after "Tusko" (whose real name was Ned) was abandoned at the Oregon State Fair that year.

Under the light of a single bulb, in a big storage room at the University of Oregon's Museum of Natural and Cultural History in Eugene, are the bones of a famous onetime Oregonian named Ned.

Ned had other names. On stage, he was billed as "Tusko the Magnificent," "Tusko the Terrible," or just plain "Tusko." Toward the end of his short life, he was known in the newspapers as "Tusko the Unwanted." But he always answered to Ned, and toward the end he started getting angry when people called him Tusko.

Ned was, of course, an elephant. Specifically, he was the biggest elephant in captivity in the 1930s, when he came to Oregon to join the cast and crew of history's most surreal amusement park, Lotus Isle.

Ned had started out his career in show business at the age of six, when he was just five feet tall. He'd been shipped to America from the lumber camps of Siam in 1898, and spent the following quarter-century on the road with various circuses and traveling shows. Along the way, Ned ate and ate, and grew and grew. Unfortunately, the bigger he got, the more nervous he made people.

The beginning of the end for Ned and his show-business career came in 1922. He'd been acquired by the Al G. Barnes Circus, and was being promoted as "Tusko the Terrible." On May 17, 1922, Ned and his circus were in Sedro-Wooley, Washington, when "Tusko" went on a rampage.

Why he did this is unclear. One source suggests he was drunk at the time, and he probably was - Tusko's later reaction to being presented with a tub of moonshine (to fight a cold) suggested a long familiarity with strong drink. Another source says Tusko was responding to an unusually vigorous beating, which, unfortunately, wouldn't be unusual for a circus elephant in the 1920s.

In any case, Ned tossed his handler aside (breaking several of the man's ribs in the process) and lit out for the wide open spaces. He overturned a number of cars, knocked a few buildings off their foundations and caused a mass panic in a Sedro-Wooley dance hall. By the time the circus crew caught up with him, he'd carved a 30-mile trail of destruction through the northern Washington countryside, demolishing a chicken coop and disrupting a lumber camp. His handlers found him stuck between two angled boxcars, so he was easily recaptured.

Circus people then followed his trail of destruction through the countryside with a suitcase full of money, indemnifying anyone and everyone they thought might sue them.

The rampage seems to have changed Ned somehow, though. While before this incident he'd been known for a mellow disposition, he now started getting increasingly testy, and circus customers were starting to notice. Finally, Barnes pulled him off the circuit for a rest at the circus's winter headquarters in southern California. What was supposed to be a short break turned into a two-year sentence after Ned lashed out at his manicurist, breaking both tusks against the bars of his prison-cell-like home.

While he was serving this time, another bull elephant was touring the country as Tusko the Magnificent. This impostor elephant, at a show in Texas, went on a deadly rampage, killing a spectator, and was promptly shot and killed. But after that many circus visitors assumed Ned was a killer - which, it must be noted, he was not.

That edgy reputation, coupled with his famous appetite - two tons of hay each week, plus supplements of apples and carrots - made Ned a net liability for the circus. So it sold him off in 1931 for $2,800 to a dapper, stocky showman from Lotus Isle named Al Painter.

And that's how Ned came to Oregon.

Painter first offered Ned to the city zoo, hoping apparently to score some goodwill points for Lotus Isle. But, mindful of what happened to the city of Sedro-Wooley, the Portland Zoo declined. So Ned spent the summer as a prime attraction at Lotus Isle.

This was a bit of a hair-raising time for his handlers. Tusko was noticeably crotchety most of the time, and when early aviator Tex Rankin flew low over Lotus Isle in his biplane one day, Tusko spooked, breaking his chains and going on a short but panicky rampage that destroyed several of Lotus Isle's Moorish-style buildings.

At the end of the 1931 season, Painter could see that "Tusko" was not working out. He wasn't bringing enough business to justify his staggering food bill, let alone the damage from his rampage. Plus, Lotus Isle itself was facing a rocky future. An 11-year-old boy had fallen to his death from its roller coaster late in August, and the majority owner of Lotus Isle had killed himself the next day, and it wasn't clear who would be keeping the lights on there - if anyone.

So Painter asked fellow show-biz man T.H. Eslick to bring Tusko to Salem for the Oregon State Fair, and while Eslick and Ned were down there, disappeared like a puff of smoke on the wind.

Eslick, at the end of the state fair, left Ned behind and slipped off home to Portland, and Fair Director Max Gehlar found himself stuck with the baby. Eslick claimed Ned was Painter's responsibility, and Painter could not be found. It was about this time that newspapers started referring to Ned ruefully as "Tusko the Unwanted."

A couple months of expensive hay munching later, the state finally managed to auction Ned off for $200. His new owners chained him to a flatbed truck and hauled north to Portland - a trip that took four hours in those pre-freeway days, and surely came near to killing Ned from the cold; after all, it was October.

In Portland, he was lodged in a ramshackle tin building near the waterfront, at East Main and Water streets, where people could pay a dime to look at him. Here he spent a miserable, cold, hungry winter.

At one point, he caught a cold and it got bad enough to put him off his feed; everyone knew what a legendary trencherman Ned was, and for him to stop eating he had to be really sick, so his handler brought him a 10-gallon keg of moonshine, cut it with five gallons of water and poured it into a trough for the visibly excited Ned. Three giant gulps later, Ned was happily and drunkenly frolicking with a hay bale, then soon fell asleep. The Morning Oregonian covered both his "ten-gallon spree" and the ensuing hangover on its front page.

In his downtown Portland shed, Ned went on another rampage, this time on Christmas Eve. This one didn't do much damage, other than to the shed he was living in; Ned seemed mostly to just want to run away. Cornered and with dozens of rifle barrels pointed straight at him, he was soon recaptured.

Back on the road

The following spring, the elephant left Portland as his new owners took him on the road. All the press coverage of Ned's troubles at the state fair and his Christmas Eve bustout had raised his profile, and tens of thousands of Northwesterners were eager to see him. But still he lost money. He simply ate too much. His handlers decided he needed to retire to a nice city zoo, and they picked Seattle.

Then they launched an elaborate con: They were going to "execute" him. They even advertised in the Seattle Post-Intelligencer for a big-game hunter to be their trigger man.

It worked. The city rallied; schoolchildren broke open piggy banks; the mayor made a speech. A few weeks later, Tusko moved into his new digs at the Woodland Park Zoo.

He died about a year later at the youthful (for an elephant) age of 42. The official cause of death was a blood clot in his heart, but one of his old handlers later told the Oregonian he'd developed debilitating arthritis and had be euthanized with "the black bottle" - that is, poison.

Even in death, poor Ned could get no respect. He was skinned immediately; one of his owners planned to stuff his hide and mount it outside a motel to attract business. The hide was ruined by vermin before he could get this done, in one of history's very few examples of rats making the world better instead of worse. 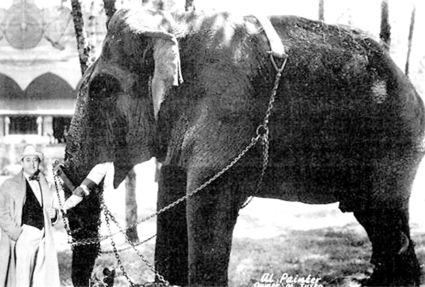 Promoter Al Painter stands with Ned ("Tusko") at Lotus Isle during the 1931 season.

The bones were cleaned by boiling in a huge pot, and the skeleton spent a summer on tour as a circus sideshow attraction. It ate a lot less, of course, but people were less willing to pay to see it. Finally its owners gave up and put it away, and eventually donated it to the University of Oregon.

Maybe someday soon Oregonians will be able to come to Eugene to visit old Ned ... and, maybe, mutter a little apology to the giant animal's long-suffering bones.