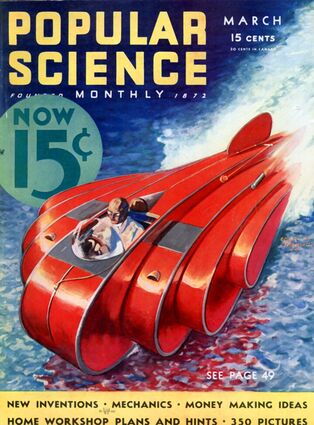 Oregon inventor Victor Strode's revolutionary boat, the "aerohydrocraft," made the cover of Popular Science in March 1933.

On the morning of April 23, 1936, the city of Portland was proudly preparing to launch its new harbor patrol boat, the Jack Luihn.

It was going to be a big deal. Mayor LaGuardia of New York City was in town, and had been invited to come to the event. And the boat itself was truly revolutionary.

The Jack Luihn was the brain-child of one Victor Wiegand Strode, an inventor with a remarkable flair. Looking back on the historical record, the picture one gets is reminiscent of the early life of Howard Hughes.

Born in the mid-1890s, he had graduated from Harvard by the time World War I broke out; when it did, he joined up, and got trained in radio and signaling work.

After the war, he got a position heading up the aeronautical school at Portland's Hill Military Academy (image that: A high school with an aeronautical elective!) and later organized the Portland Airplane Corps.

By 1936, Strode was already well known as a prolific inventor. By the time of his death at age 50 in 1944, he'd invented a primer valve, a vacuum preventer, a sleek tri-motor aircraft design - and a boat.

If Buck Rogers had a speedboat ...

This boat: It was quite possibly the highlight of Strode's inventing career, although other projects surely made him more money. To create it, he had teamed up with aeronautical engineer Fred Jones, another Portlander, who had helped design DeHaviland airplanes during World War I. And this boat was like nothing anyone had ever seen before.

The basic idea was to take an eight-foot-wide section of airfoil; drop a propeller through the bilge on a 90-degree gear, like a modern outboard motor; and put enough power through that propeller to allow the airfoil to pick the boat up off the surface of the water.

That's right: it would literally fly above the water's surface, with the only part of the boat touching the water being the propeller and shaft.

For stability, the boat would be made of four different thicknesses of wing sections - with the fattest in the center, forming the fuselage, and the other three stepping outward, so that drag would be balanced.

Strode had patented the design in 1933. At the time, he'd envisioned it having a variety of uses, especially low-drag pontoons for seaplanes, but almost immediately he set about trying to make a boat out of it. He dubbed it the "Aerohydrocraft."

Experiment was a success

Down in Coos Bay, Strode commissioned the construction of a prototype - a single-seater with an open cockpit. The power plant was a stock Ford V-8 flathead auto engine, putting down 55 horsepower. According to an article in Popular Science, the single-seater reached speeds of 70 miles an hour.

"It behaves like an ordinary craft until it attains a speed of 45 miles per hour," the article notes. "At this velocity, which corresponds to the taking-off speed of an airplane, an abrupt change occurs. The pilot can feel the boat rise from the water as the fins take hold on the air. Only the propeller beneath the hull remains in the water where its full thrust is effective."

Fresh from this success, the following year Strode applied for and got funding from the federal government's Depression-era State Emergency Relief Agency jobs program to build a bigger version of his prototype - a high-speed ambulance boat for the Portland harbor.

A year and a half later, the boat was there, finished, ready to launch. It was considerably bigger than the open-cockpit prototype - 24 feet long from tip to tail. In the fuselage, there was a tight cockpit with seating for two people; behind them, there was an ambulance bay, with accommodations for two patients on stretchers.

And on that spring day, at the foot of Stark Street where a few dozen years earlier the ferry used to land, a group of city notables was there to launch what they surely believed was the future of high-speed motorboating.

Inventor Strode was there with his wife, Ruth, who was going to do the honors of christening the sleek-looking plywood beauty. The Morning Oregonian had given the project plenty of publicity, including a couple pictures. Factories along the waterfront were ready to welcome the new boat with whistle blasts.

Into the water went the big aerohydrocraft

The answer seems to be a pretty firm "no." However, its failure must have involved some embarrassing details, because there is simply nothing more about it in the Oregonian - until six months later, in January 1937, when a "year in review" article mentions that it was "noisily christened and then quietly retired from public view."

Just seven days later, a three-inch-long article buried deep in Page 11 announced that the City Council had voted to officially release any interest in it.

"For some time the boat has been out of service," the article read, "but it was said the boat might be salvaged if title were transferred to Mr. Strode."

There may be some details to be gleaned from the biography of Victor Strode, which his wife, Ruth - who later became a writer for the Oregonian, by the way - penned after his death. The only copy of that biography is in the archives of the Oregon Historical Society. Also, there may be Portlanders who remember what happened to the boat; after all, this was only 75 years ago.

But some educated guesses can be made, based on the laws of physics, as to why the aerohydrocraft didn't work out for Portland.

At speed, this boat would be essentially hovering over the surface of the water, with the propeller shaft dropping down into the drink. Throw the rudder over to make a hard left turn, and what's to prevent the centrifugal force of the turn from tipping the boat over until the outboard wingtip touches the water doing 55 mph? What would happen then? A jolt? A terrifying cartwheel crash? It's hard to say.

And then there's the propeller shaft. With such a heavy boat, the forces this shaft would be subjected to would be tremendous, and in many different directions.

Looking a bit like a parade float built around an old Fiat, the brand-new patrol boat is launched in the Willamette in 1935. This might actually be a photo from its launching and christening ceremony.

In any case, the Aerohydrocraft disappeared from the world of boat types almost as quickly as it vanished from the Portland waterfront. Today, few powerboat aficionados have even heard of them - or of the time Portland took a chance on the cutting edge of naval architecture.

By the way, there's a company called Fiddlers Green that sells a plan for a paper or cardboard model of the Aerohydrocraft on line. An Internet search for "fiddlers green sea gull boat" will take you right to it.