Statewide Bottle Hunt is on 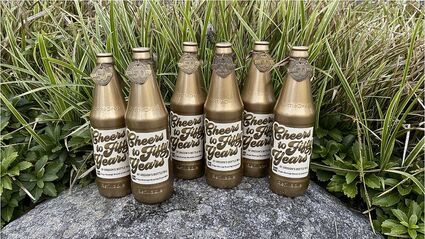 Finding one of these special "Hidden Bottle Hunt" containers could mean a $500 bonus to a local non-profit like one in the McKenzie Valley area.

On July2, 1971, Governor Tom McCall signed into law the nation's first bottle and can redemption system, which has helped keep Oregon clean and pretty litter free for 50 years. Not only was it the first, but it remains among the best, with Oregon regularly seeing some of the top redemption and recycling rates in the nation.

To mark the 50th Anniversary of the Bottle Bill, the Oregon Beverage Recycling Cooperative (OBRC), parent company to BottleDrop, is hosting a treasure hunt by hiding six commemorative, gold-colored, 50th Anniversary bottles in parks throughout the state.

The six, statewide Hidden Bottle Hunts launched on July7th and runs through the 11th. OBRC will release one clue per bottle, per day, leading hunters to the final hiding spot.

The lucky winners will get to keep the commemorative bottle and select a BottleDropn onprofit partner to receive a $500 donation through BottleDrop's Containers for Change program.

Participants can sign up to receive daily clues at the BottleDrop Hidden Bottle Hunt webpage, or can view new clues each day at bottle drop centers. Six separate hunts, geographically dispersed across Oregon, will be conducted simultaneously, with separate clues being released daily for each hunt.

"There's no better way to celebrate the Bottle Bill's 50th birthday than to engage Oregonians in a fun outdoor activity that features the special places it helps keep litterfree," said Eric Chambers, external relations director for OBRC, the not-for-profit cooperative that serves as the operational steward of the Bottle Bill.

"Our Hidden Bottle Hunts will be fun for individuals and families, connect closely with the Bottle Bill's mission of protecting public spaces, and best of all, the winners get to 'redeem' their bottle for a nice donation to one of 4,000 participating nonprofits serving communities across Oregon," Chambers added.

To sign up for the search, go to: tinyurl.com/2crhc7b5