WALTERVILLE: Started over 20 years ago, the student garden at the Walterville Elementary School has been traditionally tended by the 5th-grade class. This year, when classes resumed after the pandemic restrictions, all six classes were involved in tending the plot behind the building.

Besides the greenery, the garden featured a functional pond with fish and frogs.

"We have six garden beds set up with veggies growing in four of the six and flowers in the other two," notes 5th-grade teacher Jennifer McGehee Gonzales. As the garden coordinator, she's been going out to check on it about two to three times a week.

But in March, during Spring break, the site was vandalized. "That time our garden shed was broken into and gone through. And again on July 1st at about 7 to 9 p.m. Both times our pond was targeted, this time with them putting soap in it and then completely draining it," Gonzales reports. "We lost some fish and frogs both times. They have broken and destroyed growing veggies and tools."

Other evidence includes smashed ornaments that decorated the garden and a broken handwashing station - with the contents scattered about - that was owned by the district. 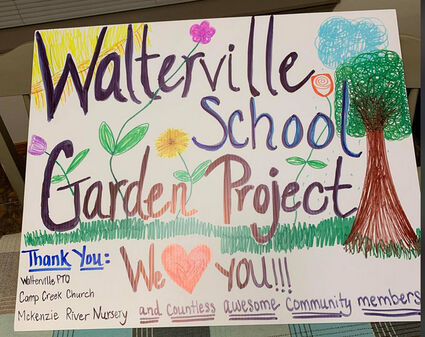 At this point, no one has reported seeing any suspects on the scene, or exactly when the damage might have happened.

"We have been locking the garden but they jumped the fence to get in. They broke some fence boards doing so as well. It is very sad because this garden is a great learning space for our students," according to Gonzales. "They love learning out there. I hope we find out who is doing this."

People who might have some leads on individuals who might be involved can report crime information occurring in unincorporated Lane County directly to the Lane County Sheriff's Office Dispatch Center at 541-682-4150, option 1, or the Tip line at 541-682-4167. A confidential email can be sent to: [email protected]