Auburn: A long-gone gold town's short but colorful past 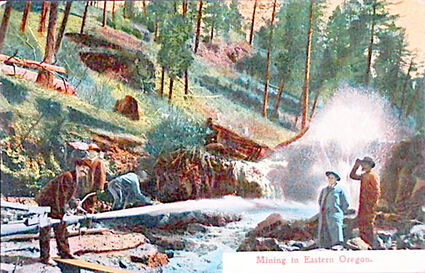 Auburn was founded by miners who sought placer gold the old-fashioned way, with a shovel and a pan, but more sophisticated techniques were soon in play. One of the reasons Auburn died, though, was a lack of water; the creek that ran through town didn't deliver enough to supply operations like the one pictured here.

A few dozen miles southwest of Baker City, if you know right where to look, you just might stumble across a few weatherbeaten gravestones - all that's left of an old cemetery.

And that old cemetery is all that's left of the biggest city in Oregon, a teeming rough-hewn metropolis of 6,000 souls that was called Auburn, Oregon.

Auburn was Ground Zero in the eastern Oregon Gold Rush. It was a massive mining camp, pure and simple. It was founded in the spring of 1861, and by 1864 it was already fading away.

The story of the Auburn's founding is as colorful as any of the dramas that played out in its streets. It seems that back in 1861, a prospector named John Adams was in Portland, flashing gold nuggets around and trying to recruit a mining party. He claimed he'd stumbled across the legendary Blue Bucket Mine, but the Native Americans were too hostile for him to risk sticking around, so he needed some strong friends to come work it with him.

In short order he had a group of some 70 eager miners ready to go, and off they went into the hills.

The newcomers soon grew suspicious, though. Adams was not acting like a man who knew where he was going. He was poking around, digging holes, doing exploratory mining - more like a regular prospector than a guy who was leading a group back to a place he knew was loaded with gold.

Now suspicious, the new miners questioned Adams closely, using, shall we say, enhanced interrogation techniques. Finally he admitted it: He'd made the whole thing up. All he'd wanted was to have a big enough party to be able to prospect without worrying about Indian attacks.

Well, some of these miners Adams had recruited had left crops rotting in the ground and brides-to-be crying at the altar to follow him. Most of them now wanted blood. After a long and lively argument between the miners who wanted to lynch him on the spot, and the ones who wanted to spare his life, a compromise was reached. Adams would be kicked out of camp with no gun, no horse, no knife and no blanket; he'd be given 15 minutes to get himself lost, and after that anybody with a clear shot at him would be welcome to go ahead and take it.

That done, the would-be miners turned and headed for home.

On the way, a group of them stopped to camp for the night in a flat spot by a small creek, and one of them - Henry Griffin - dug a test hole while dinner was cooking.

Three feet down, he hit bedrock ... and gold.

It wasn't the Blue Bucket Mine, but it was a lot of gold.

Adams, by the way, had been following the party at a distance; some of his friends had been supplying him with food. After this happy discovery, several sources say he was allowed to rejoin the party and stake his own mining claim; I haven't been able to verify this, but it's a nice thought.

Word soon got back to Walla Walla and The Dalles, and soon miners - along with the gamblers, saloonkeepers, prostitutes, gunfighters and roustabouts that always seemed to show up to help them get comfortable - were pouring into the area, and forming a sort of rough-hewn town made chiefly out of log huts and canvas tents. They called it Auburn.

The law in Auburn was of the classic rough-cut frontier kind. The citizens actually drew up a legal code. It specifically outlawed shooting at or stabbing people in public places; drawing any deadly weapon with the intent to use it; and drunk and riotous conduct in the streets; other than that, it was pretty much game-on.

At first the town was part of Wasco County, but the county seat was 300 miles away in The Dalles. Dick Pintarich writes that one miner, arrested for killing his partner in their tent, claimed self-defense, and the townspeople decided to send him to The Dalles for trial. Two men agreed to escort him there, and the townspeople advanced $50 for their expenses. The three of them then vanished, but were seen later prospecting together in Idaho - "no doubt with $50 worth of new tools," Pintarich observes wryly.

Generally, though, the murder rate in Auburn was kept relatively low by the ferociousness of what passed for justice there. That ferociousness seems to have been reserved for "foreigners," though - Frenchmen, Mexicans and Chileans.

The lynching of Spanish Tom

The most notorious incident in Auburn's short history happened when a Latino man known to history only as Spanish Tom strolled into a saloon one November night in 1862, and tried to get in on a card game being played by Henry Labaree and Jack Desmond. The problem was, he had no cash to ante up, and the other two weren't interested in Spanish Tom's IOUs. Voices were raised, and then Spanish Tom pulled a knife, and a couple seconds later was running out the door as Labaree and Desmond lay bleeding, dying or already dead, on the floor behind him.

When Spanish Tom was recaptured a couple days later, the sheriff and justice of the peace tried to initiate the prosecution process. The two officials started making ready for a speedy trial, probably followed by an execution.

The other 5,998 residents of Auburn, however, seemed not to be in a patient mood. Soon a mob surrounded the judge's office. They weren't here for the trial. They wanted the prisoner - now.

The judge, when he saw which way the wind was blowing, grabbed his docket and ran for his life, leaving the sheriff to hold his ground - which he made a valiant effort to do. But the mob got hold of Spanish Tom's leg iron and used it to drag him away to the hanging tree, letting his head bounce on the ground as they ran.

One of Spanish Tom's friends, whose name is also lost to history, tried to put him out of his misery with a shot, but missed him and instead wounded three members of the mob. Other members of the mob gave chase as Tom's friend ran for his life. He was too slow, and went down in a hail of bullets.

Eventually, the mob got Spanish Tom to the tree, and found him already dead. But they strung him up anyway.

A few weeks later, the sheriff started construction on a new jail - one clearly designed to withstand siege by angry mobs.

The gold in Auburn was gone in what must have seemed like the blink of an eye. Six thousand eager miners can get a whole lot of dirt dug up and moved around, and it took them just two summers to do it. By 1864, the Salem Statesman reported that the town was all but deserted. The action had moved to other nearby towns like Sumpter and Baker City, which had more going for them than just proximity to the goldfields.

Today, those gravestones are all that's left. If you look around, you'll find the graves of Spanish Tom's two murder victims, and of Henry Griffin, the guy who started it all. You'll also find plenty of anonymous graves marked only by a dip in the ground where the coffin collapsed.

Like the people buried in those graves, Auburn is long gone. 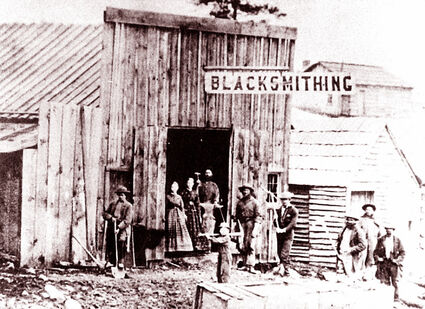 The Thomas Vernon blacksmith shop in Auburn. To judge by the amount of milled lumber visible in the picture, this was probably in 1863 or later; for the first few years, planks had to be laboriously cut with whipsaws, so Auburn was chiefly built with logs.