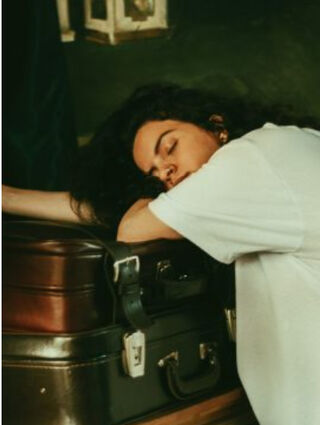 I need some help with my girlfriend. We are in a huge fight right now, I guess because of money.

It all started last year. I came out to my mom, and she kicked me out of her house. My girlfriend Kimmy asked me to move in with her and her roommate. Since day one I have been paying rent, and I never had a problem with that.

Kimmy's roommate wanted to leave the lease two months early, and I would assume the remaining part. I had no problem with that. I had to give the roommate $1300 for her share of the deposit.

Kimmy was explaining this to me, and I didn't completely understand. She got frustrated and raised her voice on the phone. I told her I'm not talking to you when you raise your voice at me.

When I mentioned it to my stepmom, she said, "Get a copy of the original lease. It will show what exactly was put down and for what." So I asked Kimmy for the realtor's number and a copy of the lease.

This started a huge fight that's lasted three days. Kimmy says I don't trust her or believe her, and she thinks I think her roommate is going to steal my money. I never said or thought that. I just wanted to know exactly where my money was going.

I work really hard. I wanted documentation showing what I needed to pay. That's it. I don't see why it had to be a huge issue. When I asked the roommate for a copy, I got it within five minutes and was able to review everything.

There is a side problem that came into this fight. I have a Toyota with low payments. The car is going to be returned in three months, and I am going to get another one.

Kimmy's sister needs a car. One day when we were at her sister's house, Kimmy asked me to keep the car in my name and let her sister make the payments. So, of course, since it's in front of her sister, I am going to say yes.

Afterwards we talked. I told Kimmy I don't feel comfortable leaving the car in my name. If her sister misses a payment, is late, or has an accident, all of that goes onto my credit. I have really good credit right now, and I'm trying to buy a house, so I don't want to take any risks.

I explained several times that I didn't want the car left in my name. But Kimmy kept saying, she won't miss a payment and there's nothing to worry about. During this fight Kimmy got very upset, and I told her I felt I was being used.

Now she is saying she would bend over backwards for my family, but I won't do the same for hers.

I have four credit cards, $100,000 in student loans, my current car, and also Kimmy's car that I cosigned for. With all of this, I am still trying to buy a house, and I don't want to mess up my credit.

I assumed Kimmy would understand. It has resulted in her not talking to me for three days. I'm trying to explain my point of view, but she is holding on to the point that I said the word "used" and won't listen to anything else.

It's not fair that my girlfriend has no consideration for my feelings and it has to come to a huge fight about nothing.

Please tell me if I'm wrong.

Gabriella, we see this as a movie. You are standing in a line with Kimmy and her sister. When the sergeant asks someone to volunteer for a risky mission, those two take one step back.

With the lease, Kimmy's intent was to set a precedent. She doesn't want you asking for details when she asks for money. An open, honest person would have said, of course you should see the lease paperwork. But that isn't Kimmy's way.

She also doesn't want her sister legally responsible for your car. Putting you on the spot in front of her sister was emotional blackmail.

Kimmy says she would "bend over backwards" for your family, but most likely that will never be put to the test.

She has been sulking for three days, which means she will punish you whenever you don't do what she wants. Pouting is a declaration that she is not asking. She is demanding.

What you have given us in describing Kimmy is a well-drawn portrait of a user. You should never commingle your finances with hers.

From the beginning this has not been a dating situation. What did she see in you? Our belief is she saw a credit score. Once she has destroyed your credit, what good will you be to her? She will be done with you.