In touch with the past 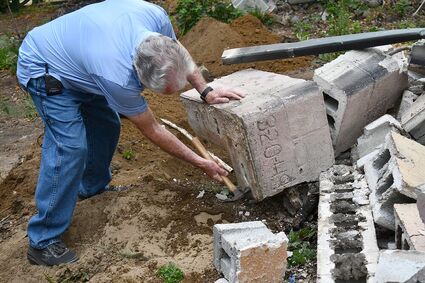 Walter Wilson, president of the Vida McKenzie Community Center, breaks through concrete that had preserved a time capsule inside the structure's cornerstone since March 20, 1949.

VIDA: The Holiday Farm Fire destroyed the building but not the treasure buried inside the foundation of the Vida McKenzie Community Center (VMCC). But last Friday people weren't too sure their search would be a success.

"This is something the state and the Oregon and the Oregon Debris Management Team is really committed to," said ODOT's Onsite Incident Commander Kevin Finch before any earth was moved. "Hopefully we'll find a capsule from 1949."

Whether or not there was anything to dig up wasn't clear to VMCC vice president Gerry Aster. She said stories about the existence of a hidden cache was along the lines of a rumor - as well as what might be inside if it was found. "There might be something to do with logging or fishing," she guessed adding that the current VMCC president Walter Wilson had heard about the possibility of something being under the building's cornerstone from older club members who are now deceased.

After several attempts only revealed some old water pipes, a decision was made to knock down a corner of the remaining walls with an excavator. That action upended the cornerstone.

Tapping the base with a hammer, Wilson determined it was and broke through to find bits of glass from a bottle that held remarkable well preserved pieces of paper.

Examining them at a nearby table, he was able to carefully unfold the sheets and read from them. 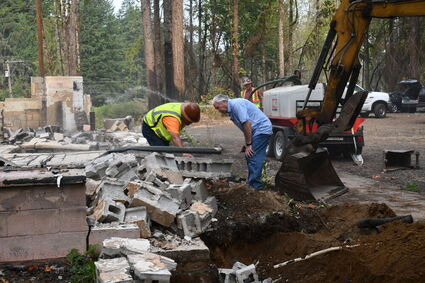 The first was the same text as a handout he'd provided while the second was a list of the clubs 47 members in 1949. The third sheet listed the original members of the McKenzie River Active Club, chartered in 1941.

"This is exciting," Wilson said. "My hands are shaking. I don't know what I expected and I was hoping beyond hope that we would be able to find something here."

Aster said there's been some discussion of what might go in a new time capsule when the structure is rebuilt. "We're definately thinking about it," she said.

Some possibilities include an updated membership list and some photos that could pique people's interest some 70 to 100 years in the future."