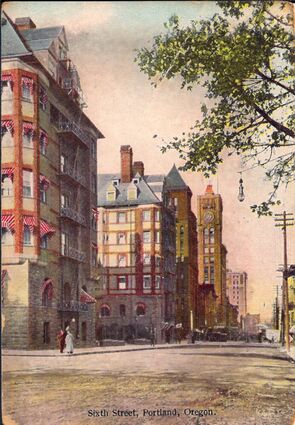 Next time you're in the neighborhood of Portland's Pioneer Courthouse Square, take a minute to look at the wrought-iron fence and archway at its south end. Looks a little out of place, doesn't it?

That ironwork is all that's left of what was probably the grandest hotel in Oregon history.

The Portland Hotel started as a railroad baron's scheme in the mid-1880s, and was opened in 1890 - a riotously colorful yet stolidly tasteful stone palace of hospitality, at the dawn of some of the most colorful and memorable decades of the city's history.

And then, in the early 1950s, the hotel - aging, but by no means gone to seed - was gone, pounded into powder and rubble to make way for a parking garage.

A grand hotel for a Gilded Age

The Portland Hotel got its start in 1882, in anticipation of the coming of the transcontinental railroad to Portland the following year. Railroad mogul Henry Villard wanted a nice hotel at the Portland end of the line. So he bought the property to do so - a city block, across from the courthouse on Sixth Street, in the center of town.

With uncharacteristic overeagerness, though, he failed to read the fine print. He soon learned that his new property contained a deed restriction: The hotel he planned to build there would have to be made of brick or stone.

This was not what Villard had in mind. But at the time he was feeling flush with cash, so he got started on it.

But business in the 1880s was a fickle goddess, and in the winter of 1883 she turned on Villard. Construction on his grand hotel stopped. Then, early the next year, chastened and broke, Villard slunk out of town.

The weed-infested foundation and roofless stone walls of the palatial hotel lay there for several years after that. The place soon acquired a sinister reputation as a dangerous place, the kind of reputation an outlaw gang's hideout picks up. It was, as the Morning Oregonian seemed never to tire of pointing out, an eyesore. But there it sat. The problem was, having been half built as a stone structure, it would have to be either completed as one or demolished and built afresh with cheaper wood. None of the other Portland bigwigs were inclined to spend the money required to do that.

Finally, a newcomer to town named George Markle realized that completing that hotel was his ticket to the inner circle of the Portland Establishment, and took the project on. He went into action, soliciting subscriptions from the cream of Portland's social crop to add to his own investment, and work got started once again.

While clearing the brush to restart construction, crews found out the evil reputation of "Villard's Ruins" was well deserved. The bodies of two murder victims - a drifter and a prostitute - were concealed in the weeds there.

By spring of 1890, the new hotel was complete. It had cost more than $1 million to build - the equivalent of $25 million today. It also may have been the first hotel on the West Coast with electric lights; Markle's father was an associate of Thomas Edison, and Portland had power coming up from Oregon City, so the builders were able to wire the place.

That May it had its debut with a massive high-society party that raged on into the small hours of the morn. And for decades after that, it stood as a sort of monument to the sophistication and refinement of Portland's social elite. This elite was starting to get a little sensitive about the rough-hewn frontier reputation of their city, still commonly called "stumptown." In the Portland Hotel, they sought to build a facility just as refined and sophisticated and elegant as anything in St. Louis, or Chicago, or even New York. And they got it.

Throughout the 1890s this hotel set the high-water mark for West Coast high-class hospitality with gorgeous rooms and spectacular food and drink. The hotel bar's signature cocktail, the "Peach Blow," was served to everyone from shanghaiing victims all the way up to Presidents of the United States; although it's not known if any of the 11 Presidents who stayed in the hotel over the years actually ever tried a Peach Blow, it's likely at least one of them did.

Legendary Oregonian editor Harvey Scott, who had contributed to the fund-raising effort and was a stockholder there, walked the few blocks from the Oregonian's offices to the hotel for lunch each day. The Arlington Club was close at hand as well - as was Madame Fanshaw's establishment, the praises of which Stewart Holbrook sings as the "ne plus ultra of Portland parlor houses." ("Parlor house," of course, is a euphemism for "upscale bordello.")

A chill must have gone through the staff at the storied old hotel in 1944, when it was learned that Julius Meier and Aaron Frank - owners of the neighboring Meier & Frank Department Store - had bought the place. By now automobiles were common in Portland, and it didn't take a champion chess player to figure out what the department store's next move was going to be.

They made that move in 1951. The last day of operations was August 15, and two weeks later all the hotel's fixtures and dishes and furnishings were auctioned off - including furnishings and sets of china used to serve Presidents of the United States.

Then the wrecking balls were deployed, and the rubble cleared away, and a two-story parking garage arose where once the finest hotel on the West Coast had stood.

The parking garage lasted only a few dozen years. By the early 1980s it was gone, and Meier & Frank happily sold the land to the city - which now wanted to make it into public space.

In planning what became the square, the city launched a nationwide design competition, and more than 150 submissions came in. There followed a short squabble over the vision for the place - soon-to-be Mayor Frank Ivancie and some other downtown businessmen wanted to build it as an enclosed atrium with an admission charge, to keep transients out, which would have meant tossing all the design submissions into the bin and starting over.

Ivancie's faction backed down, though, in the face of near-universal resistance, and construction began on the site. It was completed in 1984.

The traces that remain

There are a few bits of the Portland Hotel still at the square today. Of course, there is the ironwork along the south side, looking very Edwardian and out of place surrounded by the square's more modern features. 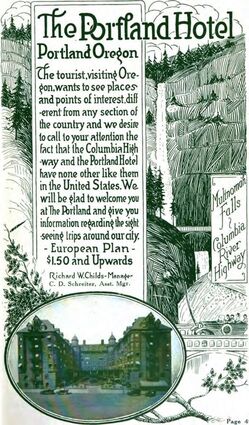 But if you took up a few of the bricks that make up the floor of the square, you'd likely find a giant block or two of cut stone - cut 125 years ago to make the foundation of what may have been the finest and most luxurious hotel in Oregon history.