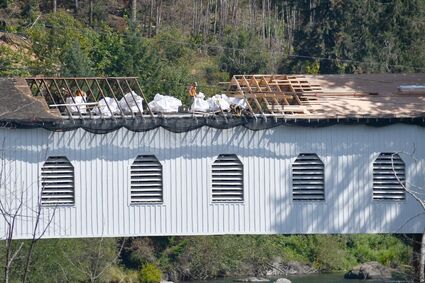 New roof trusses, sheeting, and shingles should help extend the life of the Goodpasture Covered Bridge in Vida, which was last reroofed in October of 2010.

VIDA: Crews from Oregon Woods are taking advantage of clear skies to do work aimed at upgrading the condition of the second longest covered bridge in Oregon. The 237 foot long Goodpasture Covered Bridge was constructed in 1938 at a cost of $13,154. The upgrades now underway will total $641,000.

Officials say current construction activity will repair damage to trusses and the roof from both the snow storm of a couple years back that stressed the roof trusses, as well as some issues from the recent fires. The primary reason for the extensive work, however, is from the snow-damaged roof and structural members caused by the weight of snow caused by the winter storm of 2019..

The contract requires that special care be taken to keep any debris or storm runoff from entering the McKenzie River. It also includes a completion date of October 29th.