Lake shelter getting some TLC 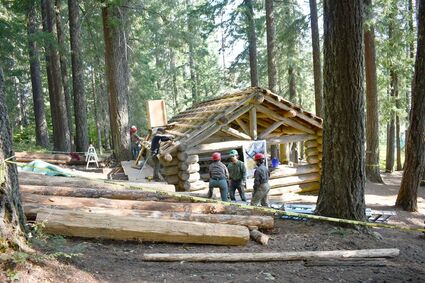 Work on the Clear Lake Picnic Shelter includes replacing the roof and some damaged logs as well as repairing and repointing the indoor chimney often used as a warming hut for cross-country skiers and hunters.

CLEAR LAKE: Volunteers from the Colorado-based HistoriCorps and the Northwest Youth Corps have been busy as summer winds down, restoring a historic picnic shelter at the headwaters of the McKenzie River.

Details on the structure date back to the 1910’s, when two companies were competing to build a hydropower site in the area. Although the Forest Service revoked that permit some cabins and outbuildings near the lake were constructed in preparation for the project.

During the Great Depression, the Civilian Conservation Corps crews constructed the picnic shelter that is still in use today. The CCC was a poverty relief program that put young men to work on public benefit projects, with local crews based at Camp Belknap, near the site of today’s McKenzie River Ranger District office.

Corps members received three square meals per day, and $30 per month – $25 of which was given directly to their families.

In contrast, HistoriCorps’ field staff travel all across the country to lead crews of volunteers, students, and veterans in hands-on preservation work to save historic buildings and structures for public benefit. The organization’s field staff includes a wide variety of craftspeople and outdoor chefs.

“Our work is important, simply because if we forget our history, we really won’t have any direction for our future, “ according to a HistoriCorps Project supervisor, John Bales