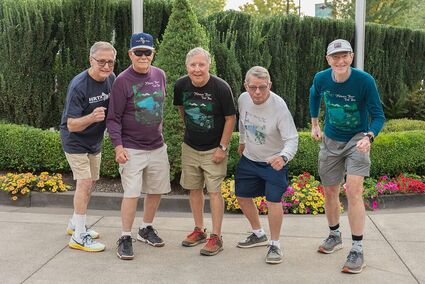 Thinking back, Robert Cox recalls, "The weather was nice and fairly warm but I was out of shape. Despite that, he and his brother George joined three other men to spend a day in the late 1980's running along a trail that passed alongside a river and a lake, through stands of trees both big and small, and on a path that varied from forest duff to lava rock. In years to come hundreds more runners would annually do the same.

George Cox says the outing had been advertised as the first of a planned series of annual events. "I had run several marathons and it piqued my interest because of my history up the McKenzie." His family background includes growing up along the Old McKenzie Highway and mining claims on Gold Hill.

The other runners had similar experiences they could share with the Coxes, having all run on various trails in the McKenzie drainage at one time or another.

"That's what we do, we just go running," according to John Postlethwait. "If things don't go just right, we still go running."

And that's what they did.

Over the last three decades, the McKenzie River Trail Run has more than once faced threats leading to possible cancellations - ranging from floods taking out footbridges or danger from fires.

That very first year it was the latter.

"A fire came and all the volunteers who were to help were Forest Service people," according to Jeff Sherman.

Because those EMT's had just returned from several weeks of firefighting, organizers didn't think it made sense to have exhausted people manning aid stations. They voted to cancel three nights before the scheduled kickoff.

"I heard Jeff and two or three runners were going to show up. We knew it wouldn't be an official event but the five of us agreed to meet at 7 a.m. that Saturday morning," Phil Vaughn said.

Although times to cover the course are now recorded and awards given out the "First Five" didn't race each other.

"We just met to have some fun," Sherman says. Their wives and some locals pitched in as well to man a couple roving aid stations that meet the group along the route.

After they completed the course, Sherman invited them over to his house for a spaghetti dinner, starting a friendship amongst them that has lasted over the years.

All of them have participated in other running events but all put the McKenzie River Trail Run in a category of its own.

Reminiscing about his exper-ence at other places - from Crater Lake to Berlin to Miami - Robert Cox said, "This has always been the nicest race as far as I'm concerned. There's none like the McKenzie and Miami is all road and pavement."

"Ultra runners are just an amazing community," according to McKenzie Run director Tim Hooton. ""We're all kind of odd ducks that are kind of different than other running communities and we always help each other out."

That might shed some light on what occurred during one of Postlethwait's training runs.

"Me and my buddy were going to do twenty miles, so we ran up ten miles and back. Five miles up there was a stump and I had a banana but didn't want to carry it the whole way,"

When he came back down he could see it was still there. When he picked the banana up it was a little bit sloppy.

"Someone had broken it in half, presumably to eat half of it," he said. "They left half and very carefully put the peel back together so it looked like it was intact."

Members of the "First Five" have all participated in McKenzie River Trail Runs at one time or another. After their getting together again last week, at least three said they'll likely be at the starting gate again in the future.