Citizens of Prineville finally challenged, defeated Vigilantes without a shot 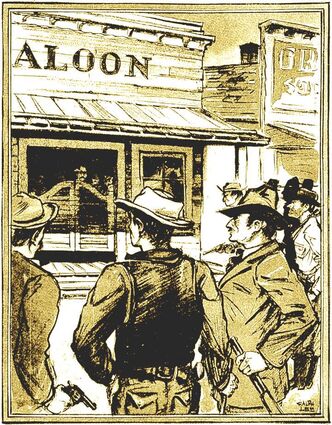 The Citizens' Protective Union, 75 strong, waited in the street in front of Til Glaze's saloon as their leader, Jim Blakely, challenged the Vigilantes to come out. They didn't, and after that day, the Crook County Vigilantes never rode again.

In the last few months of 1882, a group of prominent Prineville-area stockmen were leading a double life: Ranchers by day, and masked outlaw riders by night. They called themselves The Vigilantes.

The Vigilantes, as you'll likely recall from last week's article, had formed out of a posse that was assembled to arrest a murderer. They brought him in, but the next morning, the posse members broke into the deputy sheriff's room, gunned down the murderer, and lynched his hired hand.

The Vigilantes had, in those early days, at least some community support. Before they'd formed, law enforcement in the Prineville area had been very light, and by several accounts worse than useless. The Vigilantes may have been scary, but they did bring something approximating law and order to the area - at least, at first.

And that's probably why, when the governor created Crook County in January 1883, the county officers and court officials he appointed were nearly all drawn from the ranks of the Vigilantes. (The idea was, the officials would be appointed by the governor, and then run for their offices in the next election year - 1884.)

But the Vigilantes' popularity didn't last long. It's hard to see how it possibly could have. They were a gang of masked riders on "borrowed" horses dispensing summary justice by stealth and by night, and keeping the town in line by delivering death threats signed with a skull and crossbones. Nothing scary there, right?

When several of the Vigilantes lynched a young horse jockey just a few days after he double-crossed them by not "throwing" a race they'd bet on, Prineville residents got the message loud and clear: The Vigilantes weren't the solution; they were the problem. They were accountable to nobody, and they were out of control.

Blamed for every murder

Oddly enough, this was a big problem for the Vigilantes too. The Vigilantes always claimed their goal was to be part of a solution to the frontier lawlessness of the early '80s, and for most of them, there's no reason to doubt their sincerity. But now they were getting blamed for every bit of lawlessness that happened in Crook County, including several murders that may have been completely unrelated to their gang's activities.

One of these was a rancher who was found shot in the head, around the same time another rancher vanished without a trace. Both ranchers had made critical comments about the Vigilantes in public, so most residents assumed these were revenge killings. But nobody really knew.

Then, a few months later, there was an argument between two young men in a Prineville saloon. One of them, 17-year-old "Mossy" Barnes, pulled a gun on the other, who was unarmed, and shot him in the chest. Before he died, the victim told Jim Blakely he'd recognized the gun "Mossy" used to shoot him as belonging to Vigilante honcho Colonel William "Bud" Thompson.

Thompson denied this but didn't do himself any favors when, several months later, he gunned down the murdered man's brother in another saloon. Blakely, who claims he was there, says Thompson walked up behind him and shot him in the back of the neck, execution-style. Thompson, in his memoirs, says he shot the man in an Old West-style gunfight after the victim tried to draw on him.

Crook County officials investigated, but the grand jury declined to indict; Blakely blames this on the presence of so many Vigilantes in the county office. The widow sued in civil court and won a $3,600 judgment, though.

The "Moonshiners" form up

After this incident, two things happened: First, Blakely got together with two other Prineville residents - John Combs and Sam Smith - to form the nucleus of an anti-Vigilante "gang" called the Citizens Protective Union, which became better known as the "Moonshiners."

The Moonshiners made a point of never wearing masks or operating in secret. They called themselves "Moonshiners" because they stood to watch on moonlit nights, making sure there were no masked riders galloping around delivering letters or bullets.

The second thing that happened was, Thompson left town; perhaps he saw the writing on the wall. He moved to Alturas, Calif., where he ran the town newspaper and got involved in another round of vigilante activity that resulted in several lynchings there.

Back in Prineville, though, things were reaching the boiling point. The stockmen's association that the Vigilantes all belonged to had a meeting and, essentially, marked out Blakely as their next hit. They also boasted that it was time for them to have it out with the Moonshiners and break their gang up for good.

By this time, though, membership in the Moonshiners had swelled to about 75 heavily-armed citizens - probably four times as many as there were Vigilantes. These now all assembled, at Blakely's request, to make a show of force - the goal being to get the Vigilantes to either stand up or stand down.

Down the main street in Prineville, they rode to the saloon where the Vigilantes were drinking and arranged themselves on the street outside.

"The gang members were looking out the windows of Til Glaze's saloon," Blakely told The Oregonian. "I was fighting mad, and so were the rest of us. We were ready to fight it out right there. 'If you think you can stop us, come on out and try it!' I hollered at the gang."

Outside the saloon, thumbs toyed with the hammers of Colts and Winchesters and horses paced nervously. Inside, all was silent. Nobody moved.

Finally, the Moonshiners dispersed, going back to their shops and ranches and workbenches. They'd made their point.

Humiliated and chastened, the Vigilantes never rode again after that. And a few months later, when Crook County held its first election, Blakely was voted in as sheriff.