Created to stifle Indian culture, boarding school has done the opposite 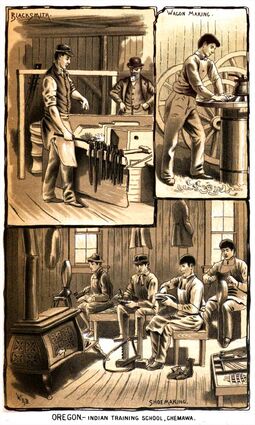 Boys at Chemawa work in various school training shops in 1886.

On the northernmost outskirts of Salem, tucked quietly away on a 275-acre campus between the Interstate 5 freeway and Highway 99, is the oldest continuously operating Native American boarding school in the country.

This is Chemawa Indian School: a place built specifically to suppress Indian culture, which instead became instrumental in preserving it.

A new approach to the "Indian Question"

Chemawa got started in 1880, and it's been educating Native American children and young adults ever since. At the time, it was part of a new movement in government policy toward the native population - a movement away from the Andrew Jackson philosophy of outright ethnic cleansing, and toward a policy more akin to forced integration.

Author H.L. Wells did a fine job of explaining this new approach in a magazine article from 1887. "For nearly a century the government of the United States has pursued a policy ... so unphilosophical in principle and so unjust in practice that this period has been very aptly characterized, by a gifted writer, as a century of dishonor," he wrote.

Then he went on to make his larger point: That Native Americans were, as he saw it, far too naïve and barbaric to function in a civilized society; that government policy up to that point had been to take advantage of that naiveté by swindling them with contracts and treaties; and that what was needed to remedy the situation was to give the Indians the tools they needed to thrive in the American mainstream, whether they wanted to or not.

Old barbaric habits and trappings of a long-gone life, such as tribal affiliation, native languages and other cultural touchstones, were considered to be holding these young Native Americans back. They had to be wiped away. What was needed was a system in which children were taken away from those influences, cut off from them entirely and raised to adulthood as an American, rather than an Indian - that was the idea.

The result of this new way of thinking about Native Americans was a system of boarding schools all across the country, of which Chemawa was the second one to be established. These schools took six-year-old Native American children and, in essence, tried to reprogram them; they learned basic schoolwork in classrooms and trades like blacksmithing and shoe repair in shop, and they worked to make their schools as self-sufficient as possible.

These boarding schools were also like a modern immersion school, in that the only language spoken there was English. School administrators also took pains to collect as eclectic an array of Native American tribe members as they could and to bring them from far away, so as to weaken the desire to keep the old ways alive.

At Chemawa, in particular, this program seems to have resulted in some very good things - primarily because it didn't work out how its architects had planned. Native American youths from all over the country, brought together by an overweening authority bent on telling them what to do, reacted in precisely the way teenagers have reacted to that sort of thing throughout time: by subverting it.

And in the process, they discovered a few new things.

For one thing, they discovered the unity of diversity. Paiute children born in Nevada befriended kids from the Sitka tribe in Alaska, people they might never have known existed had it not been for boarding school. In 1887, just seven years into its operations, Chemawa was home to about 200 children from 29 different tribes, from the close-by Kalapuya to the distant Chippewa and Crow.

The Man, in the 1880s, hoped this diversity would cause the children to drop their tribal feelings and forget their tribal traditions and replace them with this new mainstream culture that they were being offered. Instead, the Indian kids came together in secret opposition to the administration's agenda. The result was a pan-Indian cultural awareness along with a familiarity and comfort with mainstream culture - a suite of social skills that gave them what they probably needed most: A sense of identity.

By all accounts, the kids responded to this very well. It is hard to find bitter, recriminatory accounts of time spent at Chemawa, despite the fact that the first several months for a non-English-speaking six-year-old at the school must have been positively traumatic. The first students, in the 1880s, were essentially forced to go, but by the early 1900s tribal families were actually asking the boarding school to accept their children; the skills they'd learn there were much more valuable than anything they could get on the reservation, and public schools were not yet open to them (something that wouldn't change, in some parts of the country, until 1948).

The students at Chemawa were hard workers, too. Although the school started out on a few acres leased from Pacific University in Forest Grove, it was soon moved to a home of its own - a 170-acre parcel that's part of its present campus. Then the students started working to improve their school - picking hops and beans and providing other services. They earned or fund-raised all the money that was used to expand their campus; by 1947 the students had almost tripled the size of their school grounds, bringing it to 457 acres, including a farm and a 35-acre orchard. (It was reduced to its current size by the Interstate 5 freeway project ten years later.)

Today, Chemawa is still a boarding school, but it's strictly a high school. This makes sense: The authorities, no longer fooling themselves into thinking it's morally OK to brainwash children, have fully embraced the wisdom of those early students, who found cultural unity and identity in the diversity of tribal backgrounds of their fellow students. It's in high school that a young person starts thinking about the things that make him/her different and special and all that. Students in Chemawa are encouraged to take pride in their heritage and celebrate it at every opportunity. The walls of its hallways are festooned with student art in the traditions of dozens of different tribes and regions, and pow wows and other gatherings are regular events there. 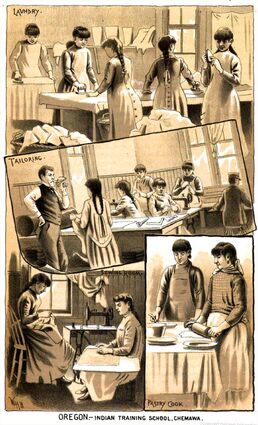 Girls at Chemawa work in various school training programs for "home economics" skills, as was the custom in 1886.

Thousands of kids have attended Chemawa over its 130-year run, and many have made a point of sending their own children there in turn. Alumni have rallied several times in the last century to save the school when the Bureau of Indian Affairs moved to close it. Despite the best efforts of its founders, who created it expressly to destroy Indian culture, Chemawa has done the exact opposite. Today, it is itself a cultural treasure.