Oregon entomologists brace for the arrival of 'murder hornets' 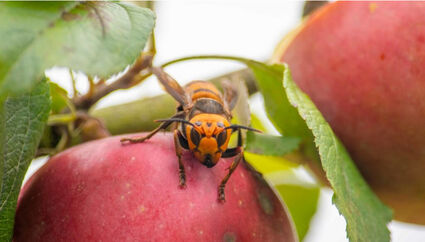 This summer a pair of Oregon entomologists traipsed through the woods in northern Washington on the hunt.

They were looking for a dangerous predator: Asian giant hornets.

Native to south and east Asia, they've earned the name "murder hornets" for their ability to decimate a honey bee hive in an hour or two. They can even kill humans.

The Japanese enjoy them fried as a delicacy on skewers or in liquor: Their venom gives it a kick.

But they're also a menace. They kill pollinators like European honey bees that are not native to Japan. If they turned up in Oregon, they could pose a big threat. About one-third of the food in Oregon and across the country - like apples, squash and broccoli - come from crops pollinated by honey bees. They're also crucial in pollinating carrots, onions and alfalfa in central Oregon.

That's why the state is preparing.

The hornets appeared in North America in 2019, with sightings in British Columbia and northern Washington.

The following year entomologists in Washington state destroyed a nest near Blaine, close to the Canadian border. This year they destroyed three in the region, including during the training mission in August with entomologist Jessica Rendon and Jake Bodart, manager of the Insect Pest Prevention and Management program at the Oregon Department of Agriculture.

Rendon played a crucial role in the quest. She actually spotted the hornet they were trying to track and found the nest.

"It was super exciting," Rendon said.

Rendon was with an official from the U.S. Department of Agriculture, and Bodart was with another colleague elsewhere.

None of them were wearing protective gear.

"It was a little scary being so close to an active Asian giant hornet nest," Rendon said. "Our heads were on a swivel."

The insects, which are the largest known hornets in the world, growing up to 2 inches long, are not aggressive like yellow jackets. They won't pester people at a picnic. They mainly consume insects and nest in forested areas, usually in the ground.

They do kill a few dozen people a year in Japan, where they're most common.

"If people encounter the nest somewhere, that is where the stinging incidents occur," said Andony Melathopoulos, a pollinator expert at Oregon State University.

Unlike honey bees, these hornets can sting multiple times in quick succession but they generally won't attack people as long as they're nest is not disturbed.

Rendon quickly spotted them buzzing through the air.

"They are very large and bright orange and very loud so in that sense they're very easy to spot," Rendon said.

But the nest, tucked near the ground, was camouflaged.

"We walked right past it the first time," Rendon said.

No one knows how they arrived in North America. Ethnologists suspect the first one immigrated as a stowaway queen on a ship.

In August 2019, beekeepers on Vancouver Island spotted three hornets. They found a nest in a park and destroyed it. Another hornet was seen near White Rock, British Columbia on the waterfront across from the island. In November in Custer, Washington, southeast of Blaine on the Canadian border, a beekeeper discovered piles of decapitated honey bees near his hives.

They had reached the United States.

But Washington state entomologists don't think the insects in Canada and the U.S. are linked.

"They appear to be unrelated because the DNA suggests they come from different regions," said Karla Salp, spokeswoman for the Washington state Department of Agriculture.

There were no reports of decimated hives last year or this one but the season is not over.

In the fall, the hornets are busy creating queens. Honey bees are a perfect source of food for them.

They'll hover outside a hive, attacking as the honey bees defend themselves.

"They're bigger and stronger and they just lop the heads off," Melathopoulos said. "With all the bees gone, they then go in and eat the honey."

Native bees in Asia which have evolved with the hornets have developed their own strategy for fighting back. Rather than hanging outside the nest, they lure the hornets inside. They surround them and madly flutter their wings, essentially cooking the creatures to death.

But the European honey bees which were brought to the United States in the 17th century have no such defense.

Each hornet nest can produce several hundred queens. They overwinter and those that survive create their own nests in the spring and the cycle begins anew.

"We thought that we've probably got most of them, but not necessarily all of them," she said. "The three nests that we have located and eradicated this year have all been located in the vicinity of that initial nest" east of Blaine, Washington.

Finding a nest is tricky, as Rendon and Bodart discovered. Officials have to catch a hornet and put it on ice to attach a GPS device. Then they try to track it to the nest. These hornets tend to forage for 30 minutes, Bodart said, and then return to the nest.

When the trackers don't detect any movement, the hornets are at home.

A small team handled the eradication.

Entomologists donned white suits, almost like space suits, that are about a half an inch thick. They used a heat-tracking device to detect the mouth of the nest. In Japan, they usually nest in the ground but the nests discovered so far in Washington have been in trees. Last year, the entomologists wrapped the tree in cellophane to ensure that the hornets didn't escape and created a hole to suction them out, Salp said.

The hornets, which usually survive, are euthanized in an alcohol solution, Salp said.

Since early 2020, more than 500 Oregonians have reported potential sightings but none has turned out to be the real deal.

Oregon entomologists are bracing for that day to come.

"It is pretty likely that they will spread," Bodart said.

The Oregon Department of Agriculture has placed dozens of traps, mainly around industrial areas in Portland in the vicinity of the airports in Portland and Troutdale.

The hornets do not dwell in the high desert or on the range - so eastern Oregon and Washington are safe - but that still leaves the Willamette Valley, which is dependent on bees for pollination. 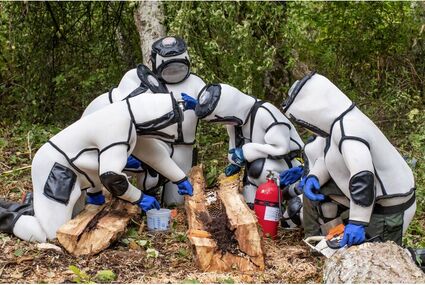 And it's not just honey bees that are at risk. The hornets also feed on other pollinators.

In the meantime, Oregon hopes the public will continue to report potential sightings.

"Having the public be aware of this issue and being our eyes on the ground is priceless," Rendon said.

If you see a large orange and black insect, and it makes a loud buzzing noise like a powerline, it might be an Asian giant hornet. Officials also asked beekeepers to report any instances of piles of bee bodies near their hive but they said no one should intervene.

"If they're attacking your hives, you have to just let it happen and report it," Bodart said.