Winter arrives on the Old Pass 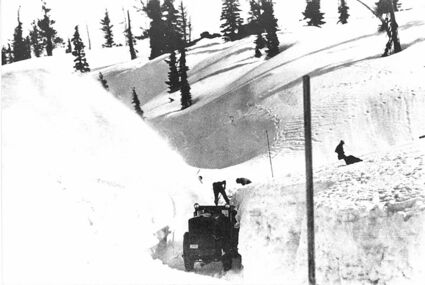 Trying to keep a highway route from McKenzie to Sisters over the Cascades was much more challenging for the Oregon Dept. of Transportation before the all-weather Clear Lake Cutoff was constructed.

MCKENZIE BRIDGE: The Oregon Department of Transportation closed the west side of the Old McKenzie Highway, OR 242, for the season on October 21st. Gates were locked from milepost 62 (about 7 miles east of the junction with OR 126) to milepost 72 near the Dee Wright Observatory.

The east side of McKenzie Highway remains open from Sisters to Dee Wright Observatory, with a tentative closure date of November 1st. Gates on the east side may close sooner depending on snowfall.

The scenic route closes annually from mid-November to mid-June. The earliest opening is the third Monday in June. That date may be later, depending on weather and road conditions. ODOT posts signs and closes gates when the road is closed.

When closed, the road is not maintained. ODOT says weather conditions, logistics and cost make it impractical to maintain it for travel year around. Crews open the road when they can ensure it is clear for safe travel.

People who choose to access the road when closed do so at their own risk, according to an agency spokesman, "It can be dangerous to be on this route when it's closed."

Some examples of potential conflicts during winter months include maintenance crews plowing, paving, felling trees, and other work with heavy equipment when there are no flaggers. It also can be difficult to hear equipment operating in different areas due to snow and trees. Plus, there are no services nor is there cell service.

Maintenance activities in the spring are done in preparation for reopening scheduled for the third Monday in June. That date, though, may be delayed, based on weather conditions.