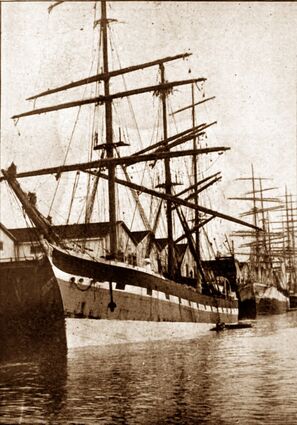 An unidentified British grain ship at the wharf, photographed in 1904. Ships like this were the primary customers for Larry Sullivan and the shanghaiiers' syndicate he formed.

In the mid-1890s, ship captains and sailors' boardinghouse owners were like partners in crime - both busily and happily swindling sailors out of what little money they had and were owed.

But in the mid-1890s, some-thing happened to upset this cozy arrangement: One particular "boarding master" - in one particular West Coast port city - figured out how to double-cross his co-conspirators, and suddenly the ship captains were left out in the cold.

Here's how the scam had been working, up until boardinghouse owner and shanghai artist Larry Sullivan and his business partners turned it on its ear:

When a ship came into port, representatives from the local boardinghouses - "runners" - would go out and meet it, breaking the law by rowing out and climbing on before it had even tied up. They'd hand out cigars and bottles to the sailors and invite them to a welcoming party at the boardinghouse.

Naturally, most of the lads didn't need much persuading. After all, they'd been at sea for weeks. So, over the side they'd go.

The captain would watch them go and smile to himself. He knew that as long as the men were ashore, he didn't have to feed them or pay them wages. He also knew that most of them would not be around when it was time to ship out, and he'd be able to keep all the wages that were owed to them. That's because it was standard procedure in many nations' ships, especially British ones, to not pay the sailors until the cruise was over - to discourage them from deserting along the way. When they did desert, the captain got to keep all the money they'd earned for the entire voyage up to that point.

So, under the old system, when it came time to sail, the sailors who couldn't be found would be replaced with new hires supplied by the same boardinghouse owners who had lured the old ones away. The boardinghouse bills would be paid with an advance against the new sailors' wages, and the skipper would pony up a bonus - popularly called "blood money" - as the price of the boardinghouse operator's services in making the sailor available.

This system was like a quasi-criminal conspiracy to rob the sailors, and it made both parties rich. The skipper got to keep all the deserters' pay, which could add up to thousands of dollars all together; the boardinghouse operator got to charge virtually whatever he wanted, and to collect a big blood-money bonus to boot.

What Larry figured out was that there was money to be made by double-crossing the captains - essentially, robbing the other robbers. And he worked out an arrangement for how to do it.

First, he disciplined the unruly Portland shanghaiing scene into something like an informal cartel - a sort of diabolical labor union, with himself as the director. Any local boardinghouse operator unwilling to join and play by the rules would find himself, as historian Barney Blalock wryly puts it, "in a great deal of physical discomfort" thanks to the bare-knuckle boxer's well-callused fists. This would ensure that the captains had to deal with his cartel, whether they wanted to or not.

Then he and the other boardinghouse men started coaching sailors to commit some minor offense that would land them in police court: petty theft, perhaps, or public drunkenness. Larry's friends in high places would arrange for the sailors to draw a little jail time for whatever they'd done. Then, when the time came for the ship to leave, the skipper would look for his men, and find that they'd all been picked up on goofy petty charges, all at more or less the same time, and had all just started serving 30-day jail sentences. Unless he was willing to wait a whole month for them to get out of jail, the captain would have to hire a new crew.

When he went to do that, he'd find the price was unusually steep. He'd shop around a little, but every crimp in town was demanding the same price; Larry had made sure nobody was undercutting the cartel.

But that wasn't where the real money was being made. The real money was the crew's wages, money the skippers had formerly been able to keep. The thing was, the skipper only got to keep it if the crew member had deserted and couldn't be found. If the crew member was ready, willing and able to report for duty, but was legally prevented from doing so because he was locked up in the local hoosegow, the skipper did not get to keep those wages, because the sailor was not a deserter. He had to either stay in port until the sailor was released from custody, or leave his wages behind for him.

So not only did this unfortunate skipper have to pony up hundreds of dollars in blood money to hire a new crew, he had to pay out thousands of dollars in other people's money that he had been expecting to, essentially, embezzle.

It was great for the sailors, though. Although Larry took a healthy cut of the cash as a fee for his services, they actually were getting paid part - maybe even most - of what was legitimately owed to them.

Howls of protest from the captains

Of course, the captains were furious, and fought back as best they could. But they soon figured out their bargaining position was not a strong one. Skippers who resisted soon found themselves entangled in a world of expensive and time-consuming problems, and every day their ships were delayed in port cost them hundreds of dollars in demurrage charges and opportunity costs.

One skipper swore out a complaint against Larry Sullivan for boarding his ship without permission. Larry was found guilty and fined $200. But when it came time for that skipper to sail out of port, he found his entire crew was staying at Larry's place, and the price for replacement sailors was $117 a head. Larry more than made up his $200 fine.

Another skipper sent one of his officers on a coastwise steamer to San Francisco to hire a crew down there. Larry got wind and sent a runner down after him, probably on a train; the runner slipped aboard the steamer and almost managed to convince the entire freshly hired crew to desert en route. When this didn't work, Larry had the captain arrested on a specious kidnapping charge, delaying sailing for weeks. By the time the frustrated captain finally got under way, he'd paid considerably more for his crew than he would have by simply swallowing his pride and paying Larry's rate.

An agent for the U.S. Department of Justice tried to help solve the problem, building a case against Larry. He found, to his dismay, that all five of the ship captains he'd lined up weren't willing to stick around Portland for the months it would take to go to court.

It was a slick operation, and it generated a chorus of international protests from the British, French and German embassies. You'll find plenty of historians who blithely assume those protests were at the shameful treatment of sailors in Portland, and the danger of shanghaiing on its waterfront; this is, frankly, naïve. The embassies didn't care about the sailors, nor about shanghaiing. They cared about their ship captains, who considered themselves robbed because they had to pay their sailors.

But in spite of all the wailing and gnashing of teeth, the Portland system didn't come to an end until 1904, when Larry Sullivan quit.

The end of an era

Larry quit, almost certainly, because a new crusading and reforming spirit was in the air. The Lewis and Clark Exposition was slated for the following year, and Portlanders were a little concerned about the fact that the roughest and most unseemly part of Portland was clustered around the railroad depot. Incoming visitors would see drunks vomiting in the gutter, crooked gamblers at work in faro banks, prostitutes leaning out of little windows on cushions and cooing at them, ruffians punching each other and who knows what else.

Plus, steamships were increasingly taking over Portland's ship traffic, and steamships didn't need crimps. Their crew quarters were much nicer, the work was far less demanding and crew members liked working on them. Nobody ever deserted from a steamer. 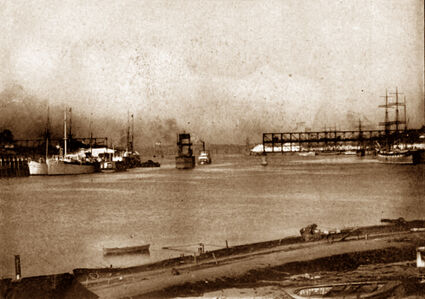 Robert Reid publisher The Portland harbor, along the Willamette River, as it appeared in 1904. The bridge shown halfway across the river is the old Steel Bridge, shown drawn for shipping to pass.

Correctly, Larry figured out that the good times were over for good. He left for Goldfield, Nevada - where he got together with a swindler named George Graham Rice to set up one of the most audacious and successful gold-mining swindles in the history of the West. When that collapsed, he eventually wandered back to Oregon, and died in Portland in 1918 - just 55 years old.