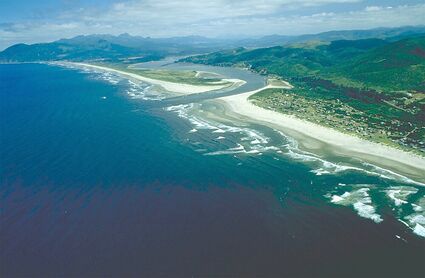 An aerial photo of the mouth of the Nehalem River. If treasure hunter Frank Watrous is right, this would have been the most likely place for the treasure to have been cached.

Stories about buried treasure are very seldom completely untrue. Even the wildest flight of golden fantasy started out, hundreds or thousands of augmented and embellished retellings ago, as true stories. Maybe that's why people love them so much: One gets to speculating about just how much truth has survived, and if any of that fantasy gold might just be still out there waiting to be discovered.

One particular tale from the Indians of the northern Oregon coast is especially tantalizing in that way because it's so close to its source. The old treasure hunter who recounted it to author Ruby El Hult in 1958 had it directly from the grandson of the man who originally (according to the story) buried the loot.

Sometimes in the 1910s or 1920s, Francis L. Watrous of Forest Grove was in the field looking for the Lost Tillamook Mine, a legendary mine supposedly worked by a tribe of Indians who, according to the legend, covered it up after white prospectors murdered two tribe members in a squabble over it.

Watrous's search for the lost mine was just getting started, so he was still making preliminary inquiries to give him a better idea of where to start looking. On this particular day, he was on the Siletz Indian reservation, asking if any of the tribe members had heard anything about it. When he put the question to one well-dressed elderly man, the man replied that he had not; but there was a story passed down in his family that Watrous might find interesting.

"My grandfather was a Portuguese sailor and helped bury some boxes of Portuguese coin down on the coast," the old man told him, according to Hult's book. "He went back to look for them, and so did my father, but they could never find them."

The old Indian told Watrous his father had come with a two-ship expedition of Portuguese emigrants who'd planned on establishing a group settlement or colony on the Santiam River, in the Willamette Valley.

The colonist made their arrangements in roughly 1845, and at that time the Oregon country was still under joint occupancy, American and British. The emigrants made arrangements for their colony with the British. Doubtless, they assumed the British Empire, the global superpower of the age, was the more powerful and important of the two countries that shared the territory and would win out in any dispute over ownership.

But it was more than three years before they were able to get their expedition underway, and when they arrived in Oregon in 1848 they found to their dismay that in the intervening years the U.S. and Britain had ended the joint occupancy agreement and fixed their boundary well away to the north. Also, American settlers had been pouring over the Oregon Trail in covered wagons for about three years, and by 1848 they'd staked out all the best land in the Willamette Valley -- including, of course, the prime farmland on the Santiam that the colony had intended to establish itself on.

Disappointed, most of the colonists decided to go back to Portugal. Everyone who wanted to do so was transferred to one of the two ships. The other ship, which was loaded with provisions for the outfitting of two colony stores, stayed behind, planning to spend another month or two selling and trading its goods with the local Indian tribes before also heading for home.

This ship, the one that stayed behind, also carried five teakwood boxes of gold coins belonging to the colony.

So, the two ships parted. But then the captain of the ship that stayed behind started worrying about all the gold he was packing around. What if a tribe of Indians decided to swarm the ship and loot it? He decided to put in to shore, cache the cash (sorry about that), and pick it up on his return trip after trading away all the supplies.

So the ship anchored just offshore from a small creek that ran into the sea, and the skipper sent a rowboat crew ashore with the five teakwood boxes, giving the crew members (including, of course, the Indian's grandfather) specific instructions for how to hide them. They were to follow the creek up a ways from the sea to a spot where they could dam it up temporarily or divert its flow and bury the boxes in the creekbed.

This they did. When they were done, they restored the creek to its original streambed and cleaned up all evidence of what they'd done.

As they finished their work, a sudden storm blew up. They hurried to the beach, but when they got there they discovered that their boat had been carried away by a rogue wave. The weather was too thick to see their ship. There was nothing for it but to settle in on the beach for the night, staying as warm as they could, and hope the weather would be clear by morning.

It was, and they quickly spotted their ship. But it was behaving very strangely. It was very close to the breakers, apparently dragging anchor, but nobody was doing anything about it.

The men hurried to the beach their ship was now looming over. There was no sign of life on board and their shouts went unanswered. Finally, just as it seemed the ship would end up in the breakers, the tide turned, saving it from destruction.

There was still no sign of life on board. The stranded sailors had to spend another night on the beach.

The next morning, they saw that the ship had beached itself a little to the north, across the mouth of a small river. They could see Indians on board looting it.

Hurriedly they lashed together a raft and tried to get across the river to the ship, hoping to rescue any survivors; but the Indians fought them off, leaving one of them wounded.

They stayed with the wounded man for a day or two, but then he died. Then, having heard nothing from any survivors, the other crew members concluded that they were now on their own, and struck out overland, trying to make it to Vancouver.

They had very few supplies. Everyone had a cutlass, of course, but they had only one firearm along and not much ammunition, and no food supplies. By the time they made it through the Coast Range, all but one had died of starvation and exposure. Finally the sole survivor -- the Indian's grandfather -- stumbled into the Iler family homestead, near Gales Creek, and was rescued.

The sailor, the story goes, returned to Portugal and got married. But he couldn't give up on the buried treasure so easily, so he decided to move back to Oregon and bring his new family with him. Joining the Hudson's Bay Company, he took a job as a clerk in its Oregon office. His new wife and son (the elderly Indian's father) soon joined him.

After fulfilling his term of service (15 years, according to the story) the Portuguese sailor moved with his little family out to the coast so that he could resume his search. But he had no luck at all. He found the stream, but he couldn't find the spot. Tillamook County's famous floods had resculpted the landscape and apparently changed the creek's channel to boot.

The sailor's young son joined in these searches, but without success.

The son, when he grew up, fell in love with a girl from the Nehalem tribe and married her. And, of course, the old man who told Frank Watrous this story was their child. He, too, had tried his luck and had given it up as hopeless.

Author Ruby Hult did some digging on the story and came up somewhat skeptical. The dates line up fairly precisely with known events in Oregon history.

And yet the story itself doesn't hang together very well. Why would the Portuguese settlers go home instead of establishing their colony somewhere else? Although their deal was with the British, the American authorities would have been happy to accommodate them somewhere that was not yet all claimed up. Wouldn't they at least have a look around before sailing halfway back across the world in defeat?

Then, too, why would the colony's treasury be left aboard the trading ship instead of whisked away to safety back in Portugal as quickly as possible? Nobody on the trading ship was going to need any hard currency to trade with Indians.

It also seems like a terrible idea to bury all the money unguarded in a random creekbed, deep in some possibly-hostile tribe's territory, rather than keeping it aboard ship where it could be watched and defended. Plus, wouldn't the captain, the man who had been personally charged with safeguarding it, want to personally supervise the crew when they hid it? He could easily have left the ship in charge of his first officer for the hour or two it took to cache the money.

But, as Hult says, people do sometimes do irrational things. Perhaps the colonists feared any other "unclaimed" land might have not yet have been stolen from the Indian tribes living on it. Perhaps the leader of the colony chose to stay on the trading ship and wanted to keep the money with him.

There is one thing about this story, though, that rings true and requires not much explanation: the disappearance of the five teakwood boxes.

Burying them in the balmy, pleasant weather of a North Coast late summer, the Portuguese sailors probably would never have guessed that the pretty little creek in which they were burying those boxes was part of a drainage that gets nearly 100 inches of rainfall every year.

Most likely, just a few months after it was buried there, the boxes were washed out to sea by a torrent of muddy water pouring down out of the Coast Range hills.

In fact, if you look closely at an aerial photograph of the mouth of the Nehalem River -- which Watrous told author Hult he thought was the most likely candidate for the small river the sailor described -- you'll see it turns sharply southward at the end, running parallel to the beach, with a thin spit separating it from the breakers, forming Nehalem Bay. If you look at the spot where the river finally turns westward and cuts through the beach to the ocean, you'll see that at that point there is a rather large gulley debouching into the river from the nearby hills.

It's not too farfetched to wonder if perhaps, in 1845, the river actually cut straight through to the sea, and that gulley drained into a creek that entered the ocean separately just to its south. If so, the landscape would have been exactly what the sailor described.

And if that's the case, the five boxes of gold would have been probably buried smack in the middle of what today is the main channel of the Nehalem River.

That is, of course, if they ever existed at all.

(Sources: Treasure Hunting Northwest, a book by Ruby El Hult published in 1971 by Binford and Mort)

Finn J.D. John teaches at Oregon State University and writes about odd tidbits of Oregon history. His book, Heroes and Rascals of Old Oregon, was recently published by Ouragan House Publishers. To contact him or suggest a topic: [email protected] or 541-357-2222