From coffee to concrete

Another round of grants supports local businesses 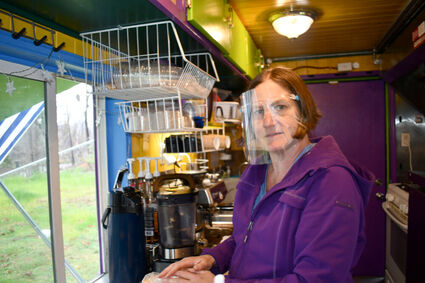 Linda Chmiel is back in her element, serving fresh meals from her Indigo Café in Blue River.

Security, food, health, construction, gifts, rentals, clothing, and graphics may not seem to have a lot in common. But they all got a boost this month thanks to the Oregon Community Credit Union Foundation and the Springfield Chamber of Commerce. Under a micro-grant program fifteen small businesses and non-profits impacted by the Holiday Farm Fire received checks ranging from $500 to $1,500.

Some businesses, like the Indigo Café, are well known. Others, including George R Kruse Excavation, are probably ones that fewer people were familiar with. Both though, were hit hard when the wildfire struck in 2020.

Linda Chmiel, owner/operator of the Indigo Café in Blue River lost everything she owned when flames burned thought the town. The grant money, she said, has in part helped her get back on her feet and aided in replacing her home, business, vehicles and all her belongings. "It's been a long, hard road," she says. Luckily, Linda was finally able to replace her home in early August and reopen her food cart business on October 9th.

Located at 51528 McKenzie Highway in front of her house, she not only has an easy commute but also better visibility along the roadway's frontage. People, she says, have reacted positively.

"It's so good to see all the familiar faces," Linda says, "especially the little kids," who she says get pretty excited to discover milk shakes on her menu. These days teriyaki chicken and luau plates continue to be among her best sellers but burritos are moving up on the cooler days.

Her current hours run from 11 a.m. to 5 p.m., Wednesday to Sunday. Looking ahead, weather conditions will determine her plans for the season. She now has a covered area with a cozy fire pit for eating or sipping espressos but admits she's keeping an eye on both storm fronts and traffic patterns to determine if she'll close for the season.

George Kruse of Vida says he was an operating engineer in Union Local 701 for two decades. Then he started his own business. Unfortunately, that was the same time that Covid -19 was hitting.

"As one obstacle after another came at me I still had the dream of coming home and trying to start a family business," George remembers. 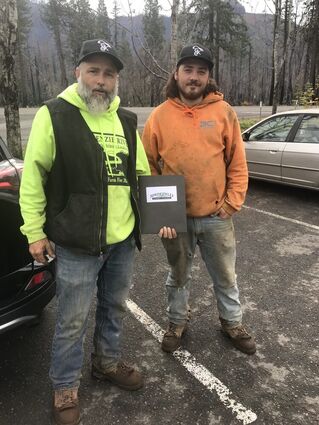 George says he collected tools when others went on vacation and now a year later he's working with his son, "Through the high demand people have for help."

Despite losing everything except his excavator to the fire, George has managed to maintain a positive outlook. "To be here right now with my community is exactly where I am supposed to be," he says. "Though we are all struggling with hope through this rebuilding process the generosity of others comes through as another stitch in my faith that is so tightly woven."

George says he's thankful for the boost the grant has given him and will use it to buy some of the tools he lost, and "To help my neighbors."

His company, George R Kruse Construction is located at 90198 Cascade View Drive in Vida with contact by phone at 541-513-9191 or via email at [email protected]