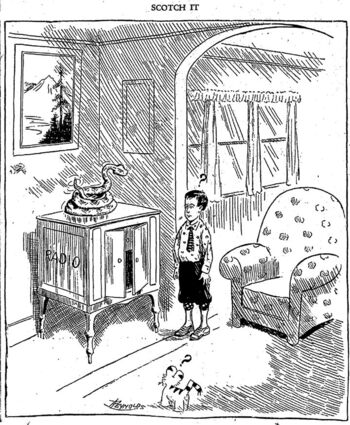 This political cartoon ran on the front page of the Portland Morning Oregonian on May 30, 1930, with a story about KVEP's license revocation.

The first radio broadcaster ever to do be sent to prison for cursing on the air was a hard-charging early shock jock known as "The Oregon Wildcat," who kept the city of Portland and surrounding regions glued to their radio sets every evening for most of the first half of 1930.

Robert Gordon Duncan was his name, and he broadcast his scandalous but highly entertaining tirades every single day over Radio KVEP (K-Voice of East Portland), 1500 AM.

The radio station was originally started in 1927 by William Schaeffer, who ran it in the customary way for several years and achieved a modest popularity with listeners. It shared time on the 1500 A.M. frequency with several other stations, so it had designated hours during which it was supposed to be off the air so others could broadcast.

Then came 1929, and the onset of the Great Depression, and suddenly KVEP was losing money for Schaeffer. In desperation, he struck a deal to transfer control of the station (and later ownership) to The Wildcat: Robert Gordon Duncan.

The Oregon Wildcat is on the air

Duncan was a populist firebrand with what passed, in the late 1920s, for a very dirty mouth. His primary focus was on "chain stores" - outfits like Woolworths and Sears that would open a store in a local community and, with the advantages of bulk-buying power and economics of scale, run the local "mom-and-pop" operations out of business. Duncan was running for the Republican nomination for Congress, and he had a little money at his disposal; it seemed like a match made in heaven.

It wasn't. Schaeffer soon wished he'd never met Duncan. Once the contract was inked, Duncan pretty much took over, and rebuffed any attempt by Schaeffer to rein him in. And as 1929 blossomed into 1930, the Voice of East Portland started drawing community attention like a train wreck in progress. There were several factors that kept 'em tuning in:

First off, The Cat's vision of how an advocate should behave frequently crossed the line into outright protection-racketeering. On the air, the Wildcat demanded contributions from local merchants to help him fight the chain stores, and if the checks they sent in were too skimpy, he'd sometimes accuse them - over the air - of peddling bad merchandise or cheating their customers.

Secondly, after Duncan lost the Republican primary to incumbent Franklin Korell, his attacks on the Congressman became even more vitriolic, and he could be counted on to light into the pol in distinctly ungentlemanly terms at least once a day. Korell seemed baffled by this continued attention. "Who is paying Duncan to continue these attacks on me now that the primary campaign is over?" he wondered, during one of the many judicial hearings that followed.

Nobody, apparently. It seemed The Wildcat was just on a tear, and one of his favorite topics was a rather frank speculation about Korell's sexual orientation.

"Korell is a bachelor, and when he was asked why he doesn't marry he says, 'I don't care for women,'" he once thundered, according to the testimony of witnesses who heard the broadcast (tragically, there are no recordings; the technology wasn't available in 1930). "What do you know about that? Isn't that a strange statement for a natural man to make? ... It must be explained thoroughly, and in ways that I can understand, to free the man who says it from the charges of practicing the vices that caused the destruction of Sodom and Gomorrah."

Then, perhaps thinking that was putting it too subtly, he went on to claim Korell had been "the roommate and bed-fellow" of a man named Clarence Brazell, and urged all "natural men" to honor the women in their lives by voting for Korell's Democratic opponent in the fall.

A third attractant to the Wildcat's broadcast was the entertainment value of good, imaginative swearing. By modern standards this was fairly tame ("He's a son of a mother who scratched her ear with her hind foot!" "You undiapered kid!" "He's a convention grifter and a rum-soaked scamp!"), but it was peppered with "hells" and "damns" and occasionally lapsed into what many considered actual blasphemy.

"I can make a six-shooter sing 'Come to Jesus,'" he roared into the mic one night just before the election he was about to lose, "and I'm going to shoot the next crook that comes into my office to bully me."

But although Duncan's daily broadcast was attracting eager listeners like a bare-knuckle boxing match, it was also making some big waves in the Portland business community. The chain stores, of course, loathed him with great cordiality, and the mom-and-pop operators understandably felt that a friend and advocate who regularly practiced extortion on them wasn't much of a friend and advocate. That left, essentially, nobody in the Wildcat's corner.

And KVEP was making even bigger waves in the broadcasting community, because the Wildcat had quit respecting the time division agreements with other stations and was now just broadcasting his rants for as long as he pleased; Radio KUJ Longview could just wait until he was done, thank you very much.

The Federal Radio Commission gets involved

Letters and telegrams from all these aggrieved groups, plus some V.I.P.s whom the Wildcat had slandered on the air, started pouring into the Federal Radio Commission, which - clearly shocked by the volume and fervor of the correspondence - got going in record time.

At the resulting hearing, Portland judge J.C. Kendall was serving as counsel for a remarkably vast and diverse array of civic organizations and prominent individuals, including the American Legion, the Chamber of Commerce and a big bevy of church groups, all petitioning the FRC to shut KVEP down.

"There is a mad dog loose in the City of Portland," Kendall fulminated. "For two hours every night we have had a persistent series of talks so utterly indecent that they offend every human sensibility."

He then went on to demand Schaeffer be sanctioned as well, because "for the past three months he has had his hand on the faucet of this filth without attempting to turn it off."

The Wildcat gets skinned

The F.R.C. members were shocked by what they heard, and moved to slam the door on KVEP in record time. Then they initiated prosecution against Duncan himself, taking him into federal custody.

While Duncan was under arrest in the federal building, one young man, the son of deceased Oregonian editor Edgar Piper, tracked him down, burst in on him and socked the 60-year-old Wildcat in the teeth. It seemed Duncan had said some rather uncharitable things about the elder Piper on the air when the newspaperman's corpse had barely cooled. A U.S. marshal tried to intervene, Piper punched him, and a general melee broke out, which ended with the 1930s equivalent of a blackstick beatdown for Mr. Piper, who was, of course, then arrested.

A sympathetic court subsequently fined the young lad the modest sum of $50 for this crime, to which he freely admitted; he had been, he said, overcome with fury at the criticism of his freshly dead father, and determined to have his punch, come what might.

"This young man would rather be a toad, and feed upon the vapors of the dungeon, than allow such procedure to go unpunished," his attorney explained to the apparent approval and sympathy of the entire court. "It is fortunate that he was unarmed, or were it not so this polecat would be lying today under six feet of earth."

Off to the slammer

Duncan himself got no such sympathy on his day in court, and a short time later The Oregon Wildcat found himself convicted of indecent broadcasting and sentenced to a six-month term in the county jail.

Duncan later tried to launch a magazine, but it went nowhere. Eventually he gave up on public life, and in the early 1940s Malcolm Clark found him running a nine-hole golf course near Troutdale - "an inoffensive, frail, rather courtly gentleman who was old before his time," the historian recalls. 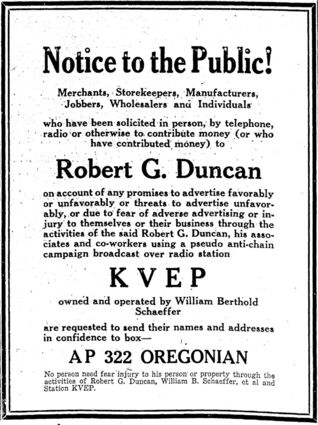 This modest ad ran in the Oregonian on April 15, 1930, in an attempt to put together a group of merchants to legally oppose the fund-raising tactics of "Oregon Wildcat" Robert Duncan.

Duncan died at the age of 73, in 1944. He had, as it were, clawed his way into the history-of-broadcasting textbooks with cutlass in one hand and pistol in the other, a 60-year-old political pirate from the crazy maverick state of Oregon. And whatever you might think of his sketchy practices as a broadcaster, you just have to respect that kind of chutzpah.