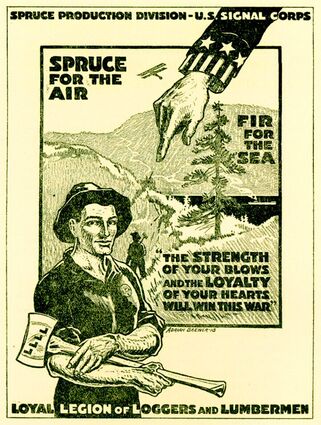 The front-cover art from a Loyal Legion of Loggers and Lumbermen publication from 1918.

In early 1917, shortly after the U.S. declared war on Germany, the first detachment of U.S. soldiers was dispatched ... to the forest of western Oregon.

It turned out the wildest, boldest and (if you were a capitalist) most terrifying labor union in U.S. history had got its hooks deep into the logging business just as demand for timber reached its peak, and as the rest of the country was marching to war, the loggers were marching off the job.

That union was the International Workers of the World - better known as the Wobblies.

The year and a half that followed would be eventful ones in Oregon and Washington. They'd see the U.S. Army actually chartering a labor union of its own; U.S. soldiers taken from the trenches of Europe and deployed with axes and saws to cut timber; industrial sabotage; and even some violence in the woods.

They'd also result in the adoption of the eight-hour workday - something the mill and logging outfit owners fought bitterly to stop, since they paid their men by the day rather than by the hour.

The cast of characters

The I.W.W. was founded in 1905, and it was by all accounts an extraordinary outfit. It was a labor union fully committed to the concept of class warfare, of the need for workers to seize the means of production, and fully convinced of the hopelessness of trying to effect change by working within the system. The Wobs didn't bother fielding political candidates to get labor laws changed; they preferred "direct action" - street demonstrations, strikes, industrial sabotage. They used stickers of a black cat - called the "Sabo-Tabby" - to let everyone know when they broke something on purpose.

They were known for ferocious street preaching, in which members would shout about the need for a revolution and for a general war against the "clowns" (police) and "barons" (capitalists).

But I.W.W. people quickly figured out that the timber industry was ready to hear their message. Real wages in the woods had been sliding for some time, and conditions were getting worse every year - bunkhouses were getting smaller and less hygienic, camp food was getting cheaper and less plentiful, working hours were stretching into the 12-to-14-hour range. The timberlands had all been snapped up by trusts like Weyerhaeuser, and there were few opportunities left for bright-eyed young men to work their way into the middle and upper classes through a logging camp.

It had become a dead end, a hobo's job. The workers were itinerant, so getting fired was no big deal; you just hired on somewhere else. They had nothing to lose.

So the I.W.W. started working the logging camps and mill towns pretty hard. They found some members, but mostly what they found was a lot of sympathy for what they were saying among men who didn't want to get involved directly.

And that's where things stood on the eve of the First World War.

What happened then was simply this: The timber markets exploded. Prices shot through the roof. Suddenly the government was buying finished lumber by the cubic acre. And Oregon in particular was the primary source for the most desirable wood of all - the straight, true, stable, lightweight, splinter-resistant Sitka spruce.

Overjoyed, the factory and logging-company owners started making plans to save and spend the torrents of lovely money that would soon be coming their way as the market price per board foot doubled and doubled again. And it never occurred to them that their low-level employees would even be aware of their good fortune. If it had, they wouldn't have considered it any of their business. It was the workers' job to cut the wood and cash their paychecks, regardless of how much their bosses were making by selling it.

So no, wages were not going to go up. If anything, they'd go down, because of the powerful incentive to lengthen the workday.

In the logging camps, though, the "slaves" (as the I.W.W.'s newspapers called them) started simmering with rage. The Wobblies had preached the concept of class conflict for a decade, and now it looked an awful lot like they were right. The bigs were about to gather in a massive windfall of profits made possible by their work, and it was clear that rising tide was not going to lift all the boats. It wasn't fair, they fumed.

And the fight was on

The loggers started striking, spiking logs, sabotaging equipment. They demanded an eight-hour workday, bunkhouses with beds in them, better wages, and a few other things. The owners of mills and logging outfits were furious and frantic about the opportunities for profit that were passing them by every day, but refused to budge. After all, if you give a mouse a cookie it will just keep wanting more.

As spring blossomed into summer, the U.S. Army started taking notice of the fact that they were getting a lot less timber out of the West than they had expected to, and sent a general named Bruce Disque out to investigate.

First, the Wobs had several very legitimate beefs. Wages were really low, bunkhouses were nasty and full of bedbugs, and twelve hours was a long time to be out cutting timber.

But he also quickly figured out that, with their earnest advocacy of armed insurrection, the Wobs were a dangerous organization, and as long as they had legitimate beefs, they would remain dangerous.

And he also learned that as long as it was the Wobs arguing for these changes, the owners wouldn't budge, for fear of empowering their enemy.

So Disque did two things: First, he sent Army troops into the woods to start cutting timber. And second, he started a labor union.

The Army's union was called the Loyal Legion of Loggers and Lumbermen. Technically it wasn't really a union, since its by-laws forbade it to go on strike. But it was an organization that soon included hundreds of thousands of workers, and one that quickly developed a reputation for being reasonable - and, thanks to the active backing of the U.S. Army, it was fairly effective in trimming away the more egregious violations of 1910s industrial management.

Many of the owners were furious. They were especially angry about having the eight-hour workday more or less crammed down their throats. But there was a point beyond which if they resisted, they would simply have had their businesses nationalized; after all, there was a war going on. So they had to swallow hard and go along.

But if the Army's plan was to take the wind out of the I.W.W.'s sails (as many feel it was), it worked. From a membership of around 100,000 card-carrying members in 1917, the union collapsed to just a few thousand, and those that remained fell to bitter internecine fighting. Their advocacy of sabotage and "hoosiering" - deliberately working very slowly - during a national shooting war had focused on them the ire of an aroused population, and many of them went to jail under the Espionage and Sedition Act, which was passed soon after. 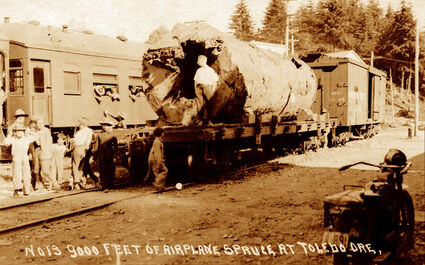 Soldiers and residents of Toledo pose with a giant spruce log, which is ready to be sent to the government's spruce mill in Vancouver.

A bloody shootout with the American Legion in Centralia after the war, which appears to have been provoked by a rogue Wob, put the final nail in the coffin of the Wobblies' reputation with the public, and then the Communists - "Comicals," in Wobblyspeak - rose up on their left and stole away their more extreme members.

By the mid-1920s, the Wobblies were spent as a serious political force.

But the eight-hour workday - that was here to stay.

Finn J.D. John is an instructor at Oregon State University and the author of "Wicked Portland," a book about the dark side of Oregon's metropolis in the 1890s. To contact him or suggest a topic: [email protected], @OffbeatOregon (on Twitter), or 541-357-2222.,