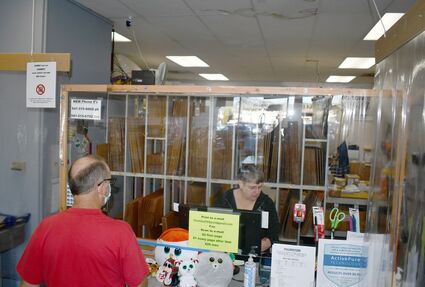 Packages showing up at Jen Nimmo's Thurston shipping store might range from snowboards to airplane parts or from saddles to talking Chucky dolls.

THURSTON: For Jen Nimmo, the month that's often been on her mind when looking at a calendar has arrived. Inside her Thurston Pack N' Ship store the reason for her interest in December is clear as a variety of people approach her counter.

It's hard to predict what might be inside the packages they're carrying. Quite often it could be a golf bag. Depending on the season, some of the outgoing shipments have included a variety of foodstuffs - like blueberries, salmon, rhubarb, or tuna. "And just the other day we shipped brown sugar and oysters to Germany," Jen said. "And though we can't ship them, I have packed several urns for people."

Customers can always utilize their professional packing service, although the shop does sell boxes and other shipping supplies. There are always items that need an extra bit of creative thinking. One was the custom box Jen built for a knee scooter to give extra mobility to a recipient who'd broken an ankle. Also qualifying for the unusual items list were a cow hoof cup, a dollhouse log cabin, and a bong.

Shipping, packing, and mailbox rentals are among the services Pack N' Ship provides. Customers can also buy stamps or greeting cards, or do some faxing, laminating, copying, and scanning - along with printing out emails or texts.

"We try really hard to keep our atmosphere light and fun," Jen says. " I think it helps people stay calm and relax a little bit, especially during very stressful times."

Her routine now is in contrast to her prior 30 years of sitting at a desk doing office work. After that, she started working for the store's previous owner, "As a part-time gig mostly just for something to do (I was in school to become a vet tech) and I loved the place and he was ready to retire so it all worked out."

People will often hear Jimmy Buffet on the radio when they walk in the door, because as Jen says, "You just can't be in a bad mood listening to Jimmy Buffet!" She also tells her three employees that if they're not happy and having fun they should be doing something else. "Life is too short and you only get one chance," is her philosophy. "At almost 50 years old I started a whole new life and I love it!"

Like too many McKenzie Valley residents, Jen was displaced when her Angels Fight home burned in the Holiday Farm Fire. "Right now we're in an apartment in Eugene and it doesn't look like we will be able to rebuild.," she says. "We just want to move on so we have started looking at just buying a new place." 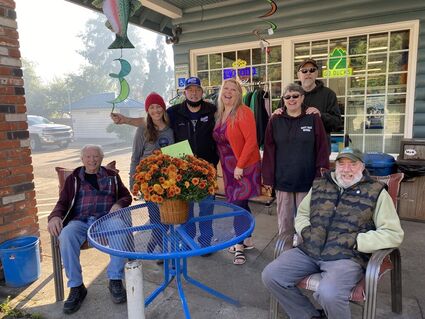 Despite living in Eugene, she is still spending time on the River after seeing a Bottle Boys post on Facebook. That led her to contact Matt (? last name) and she's been helping out for the last six months. "Matt, Pete, and Walt have been great to work with," she says. "My partner Steve goes up Wednesday mornings and helps out and we both go up on Saturdays." In addition, her Pack N' Ship Thurston location has become a convenient place for people to drop off the bottle donations.

And, for someone who might want to send a present but hasn't gotten around to shopping for one, they can make a last-minute selection from Jen's new line of Beanie Babies.