Rabies epidemic was like a war in Eastern Oregon 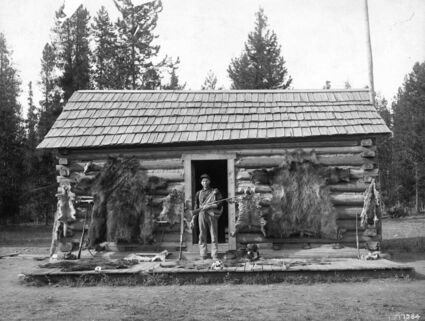 This is J.R. Carper, the U.S. Forest Service government trapper, posing on the front porch of a log cabin in 1908 with the skins of a number of predatory animals he's killed. This was two years before the rabies outbreak, when Carper's trapping expertise would be called upon to help reduce the population of potentially rabid coyotes.

"However," he added - no doubt with an exasperated sigh - "we intend to investigate the situation in Wallowa County and ascertain the facts at once."

Two weeks later, on Aug. 21, 1910, Dr. Lytle was back and ready to announce what he'd learned. As expected, he'd found no evidence of rabies, he told the Portland Morning Oregonian. And as for that torrent of panicky letters from Eastern Oregon residents - letters telling of coyotes wandering into people's yards in broad daylight and attacking their pets, of docile pigs turning vicious and chasing farmers up trees - why, that was probably nothing but a few cases of strychnine poisoning. There was nothing to worry about.

The Oregonian must have been convinced. They ran the story on Page One under a headline reading, "REPORT OF RABIES WRONG."

The very next day, also on Page One, the Oregonian ran another headline. It read, "Sheepherder of Washington Lies at Point of Death."

It seemed a shepherd, far up in the hills tending to his flock, had been attacked and bitten by a mad coyote a couple weeks before. Now, the paper said, he was about 30 miles from medical attention, along the Snake River, in late stages of rabies and very unlikely to survive another day. And across the river in Idaho, two boys had already died of the disease.

The great Eastern Oregon Coyote War had claimed its first few human victims. Rabies had come to the Beaver State. And it was only going to get worse.

Throughout the next few years rabies spread remorselessly through the rest of the state. Residents would know the dreaded disease had reached their area when coyotes suddenly started appearing in broad daylight, seemingly not caring if anyone saw them or not. Residents found this unnatural behavior extremely disconcerting.

"The coyote - the poor, miserable coyote - an animal of such nature and habits that its name and that of coward are almost synonymous, who shuns man as Satan does holy water, under the influence of this infection becomes as fierce, ferocious and venomous as the cornered cougar, the wounded tiger or the bear," the Klamath Falls Evening Herald wrote, rather turgidly, in early 1915. "The change of Dr. Jekyl and Mr. Hyde was never so complete as the change of the slinking, cowardly night prowler into the wildly attacking, fighting animal whose fangs are charged with a poison that means sure death to those inoculated and untreated."

If a rabid animal bit you in the 1910s, you probably would not die - that is, if you sought treatment right away. Louis Pasteur and his lab staff had invented the rabies treatment 25 years earlier, and it was well known and, after the state realized what it was up against, practiced. But it was painful and it was unpleasant and occasionally someone would have a bad reaction to it and die - so the stakes were fairly high.

Newspapers issued a steady patter of dark warnings as incidents became more and more common. Coyotes were seen slavering in the streets of towns and cities from Prineville to Burns, their mouths full of red foam, their tongues hanging out the side and dripping blood from having been bitten hard and repeatedly under the influence of the madness.

The newspapers quickly filled with stories of rabid dogs and cats, of coyote attacks, of people bitten and saved because they quickly got vaccinated - and of people bitten and dead because they didn't. Dog owners were ordered to muzzle their animals. A Portland man was prosecuted after his dog, which was supposed to be on rabies watch, got loose and bit a 9-year-old boy. Bounties on coyote pelts reached dizzying new heights, and poisoned coyote bait was hopefully distributed all over the landscape.

Residents wore pistols on their hips, but shotguns were the tool of choice, since a rabies-crazed animal could sometimes charge through a hail of bullets but a charge of bird shot would knock it physically backward. And shotguns could be heard going off with increasing frequency in Eastern Oregon towns as each season wore on.

The summer of 1916 was the nadir of the rabies epidemic.

"People living in Crook and Deschutes counties in 1916 had to practice ceaseless vigilance," historian David Braly writes. "A man could be working, a woman hanging her laundry or a child playing when suddenly a snarling and vicious coyote, foam dripping from its mouth, would spring from nearby woods to the attack."

At night, people in lay awake in bed listening to the sounds of infected coyotes and cougars stumbling around outside their homes, dragging paralyzed hindquarters. Sometimes these animals would still be there in the morning, having succumbed to the fatal disease.

The maddened animals took a heavy toll on livestock as well, attacking and biting slow-moving cattle and sheep and picking poison-fanged fights with dogs. Carcasses of all kinds of animals, all dead of rabies, littered the landscape. Bats were everywhere, flying at mid-day, landing on animals and biting.

"No place, including buildings, was safe from rabid animals," Braly writes. "One woman near Prineville was forced to flee out of her own kitchen when a crazed mountain lion crashed through the window."

But 1917 was a little better, and by 1918 some hopeful voices were actually suggesting that the epidemic was over.

It wasn't over, of course. Rabies in Eastern Oregon would continue to be a problem for at least a decade after that. In the early 1930s, newspaper articles were still bringing word of an infected cow here, a coyote attack there, and taking the whole thing very seriously.

But the summers of madness, of neighbors walking out to get the mail and stopping to chat with loaded shotguns tucked under their arms, of schools canceled for fear the children would be attacked en route - those days were, thankfully, over.