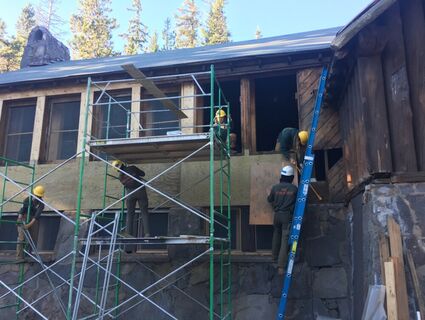 The southwest wall of the Santiam Lodge had been damaged by the heavy snow load in 2000. Luckily, a JobsCorps crew rebuilt the wall, making it structurally sound before this year's winter season.

2021 was the third year of the restoration work for the volunteer based Friends of the Santiam Pass Ski Lodge (FSPSL), despite difficulties caused by the COVID-19 pandemic. This year a fully commercial electric system was installed, further structural issues were repaired, windows sashes and jambs were restored, and siding work was initiated. Significant funding was procured , which organizers say puts them in a position to begin other work early in 2022.

In early April. according to the FSPSL newsletter, timber from Strube Flats was loaded up and moved to Levi's Sawmill in La Pine. The cedar lumber was milled to make repairs to the exterior and interior of the lodge as wel as repairs on the garage and construction of a pump house for a new well.

Other activities included finishing up the new electric system that was begun in 2019. Details included trenching over 700 feet from south of US 20, laying of two 4-inch conduits and installing two concrete vaults. The commercial electric panel was installed by Cassidy Keeton of Ridgeline Electric in Sisters. A few weeks later the Central Electric Cooperative crew came and ran the lines, installed the transformer and meter, then energized the system.

People working at the site included Heart of Oregon, a Central Oregon non-profit involving 16 to 24-year-olds by providing job skills training, education, and leadership development. Three crews from Heart of Oregon worked at the lodge in the summer of 2021 performing general cleaning and clearing, digging out the trench for electric and water lines, clearing downed trees, and sealing the cedar siding for the lodge. We are so thankful to The Roundhouse Foundation in Sisters subsidized the cost of the labor for Friends of Santiam Pass Ski Lodge making the work on the lodge possible for a fraction of the cost.

In league with HistoriCorps, a five-person crew from the Job Corps worked on the lodge from late-September through mid-October. Workers with that crew rebuilt the front southwest wall that was damaged by heavy snow in 2000. They also repaired significant dry rot problems in the dining hall. In addition, 80 feet of sill plates and rim joists were replaced, much of which was severely deteriorated.

The FSPSL group estimates the restoration will cost about 2.5 million dollars. That amount includes site improvements, but not all of the improvements planned before the lodge opens for operation.

One of the major challenges for 2022 is funding for the septic and well systems. The current systems are no longer restorable, so a completely new water and septic systems is needed. The FSPSL says both are necessary for operations and with them in place they say they can work on the lodge interior through the winter. An exact price tag hasn't yet been pinned down, but is expected to be between $300,000 to 400,000.