Rather than close, feds will to contract state for fish production 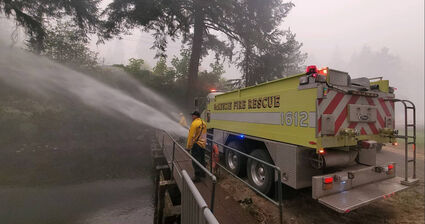 Multiple agencies, including McKenzie Fire & Rescue, were involved in saving the sturgeon in the show ponds at the Leaburg Fish Hatchery following the Holiday Farm Fire.

The U.S. Army Corps of Engineers is in the process of transferring the fire-damaged Leaburg trout, salmon, and steelhead hatchery it had scheduled for closure to the Oregon Department of Fish & Wildlife.

Both the Corps and ODFW have confirmed that the Leaburg Hatchery on the McKenzie River, currently owned by the agency, will be transferred from federal to state ownership in the near future, perhaps as soon as this year. The transfer of ownership will come at no cost to Oregon, other than upkeep and operations costs to keep the facility running.

"Our focus is production of mitigation fish," Corps spokesperson Tom Conning said. "Operation and maintenance of aging infrastructure, such as the Leaburg Hatchery, is expensive and time-consuming. Additionally, we don't need to operate a facility to acquire hatchery fish. It's more cost-effective to use a contract. Finally, disposal of the Leaburg Hatchery to another government entity is beneficial to both parties."

ODFW is already using the site, located at mile 38.8 of the McKenzie River, and has been producing chinook salmon and summer steelhead smolts that the agency releases into Willamette River basin streams. It also produces trout for rivers and its high lakes stocking program.

It was built by the Corps in 1953 to mitigate for lost trout habitat caused by the construction of the Blue River and Cougar dams on the McKenzie River, as well as for its other Willamette Valley projects, a total of 13 dams.

Conning said the Corps is not selling the hatchery to ODFW, but instead had been directed by the Water Resources Development Act of 2020 to transfer its ownership to Oregon "without consideration," Conning said.

The Corps has been providing ODFW access to the hatchery through a no-cost memorandum of understanding, said Scott Patterson, ODFW Fish Propagation Manager. However, the federal agency was not funding maintainence or repairs on the hatchery after damage caused by the devastating Holiday Farm Day Fire. While ODFW continues to produce fish, it did lose production in the fire.

Ironically, some 1.75 million juvenile fish were evacuated from a hatchery in Cascade Locks on the Columbia River to the Leaburg Hatchery in 2018 due to a threat on the Cascade Hatchery by potential debris flows as storms hit areas devastated by the Eagle Creek Fire in the Columbia River Gorge. A debris flow there could have overwhelmed the water intake system and harmed water quality, which could have killed fish at the hatchery, prompting the decision to transfer smolts to Leaburg.

In addition, one million juvenile coho (under 1-year-old) bound for the Lostine and Umatilla Rivers were evacuated to Leaburg in September of 2017.

Today, the state is funding the facility in the current biennium (2021-23) to produce spring chinook, summer steelhead and trout, and the Corps is continuing to contract with ODFW for chinook salmon, summer steelhead smolts, and trout produced at the hatchery.

"ODFW is the Corps' current contractor for the production of Chinook, steelhead, and trout in the Basin," Conning said.

The contract for producing trout for the Corps in FY 2022 amounts to $1.13 million.

The Corps has a long history with ODFW in running the Corps-owned hatchery. Oregon had raised chinook, summer steelhead, and trout for the Corps at the Leaburg Hatchery since 1953, when it was built.

However, after the Corps revamped its contracts for hatchery production at six Oregon hatcheries in 2017, it had planned on abandoning its Leaburg facility.

In 2018, the Corps ceased production of summer steelhead at there and outsourced the hatchery's rainbow trout production to the privately-owned Desert Springs Trout Farm in Summer Lake, Oregon. That outsourcing contract had Desert Springs produing some 277,000 pounds of trout each year at its facility in Central Oregon for distribution throughout Oregon.

Today, some of the trout produced at Leaburg will go to the Corps and be distributed in the Willamette River basin. Some of those replace the fish produced until recently by Desert Springs. Other trout from Leaburg, Patterson said recently, will be stocked for ODFW programs. Corps trout mitigation fish are also scheduled to be produced at Roaring River and Willamette hatcheries, he added.

Patterson recently said that summer steelhead projections for the Leaburg Hatchery amount to 108,000 smolts for the McKenzie River and another 121,000 smolts for the North Fork Santiam River - both rivers are in the Willamette River watershed basin. However, the production of steelhead in hatcheries is not without issues.

"I'm concerned, however, that climate change will push the 'risk' needle more towards fish pathogen as water warms not only in higher temps but the duration of warmer water. I believe fish pathogen will be more a problem going forward placing hatcheries, such as Leaburg, more at risk, as well as wild salmonids."