After Strikes, OR Hospital Workers Notch Win in Union Contract 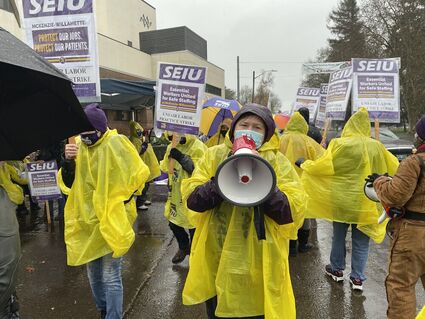 Workers at McKenzie Willamette Hospital were among a wave of workers nationwide that went on strike in October.

Healthcare workers at an Oregon hospital have achieved what they say is a "win" after several strikes in recent months.

Nearly 300 workers and members of Service Employees International Union (SEIU) Local 49 at McKenzie-Willamette Medical Center in Springfield are celebrating increases in their pay, their health subsidies and education fund.

Aaron Green, a certified nursing assistant at McKenzie-Willamette Medical Center and a member of SEIU Local 49, was among those who went on strike in October and again in December.

"It took a lot for us to go out twice, but it gave management the push to understand where we're coming from, and to see we're out here to support our community," Green asserted. "And our community came out to support us, and that helped get the message through to them."

The workers represent a wide array of professions, including emergency-room technicians, physical therapists and social workers. The average wage increase over the new three-year contract is 22% or more than $6 an hour. A McKenzie-Willamette Medical Center spokesperson said it is pleased it was able to reach an agreement with workers.

Green pointed out competitive wages are a crucial part of properly caring for patients.

"What we saw happening was, we couldn't hire people, or we'd hire people, and then they would turn around and leave in a few weeks," Green recounted. "More competitive market wages will allow us to keep and retain staff to provide the best care for the patients that come here."

Green is also hopeful about the establishment of a committee between labor and management to solve problems in the hospital.

"When labor and management put their heads together, there's almost nothing we can't fix," Green concluded.