Bank robber became vice-president of the bank he robbed 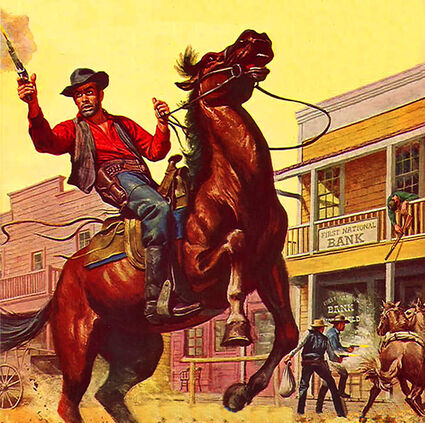 For Men Only Magazine

The front cover of the June 1958 issue of "For Men Only Magazine" featured this illustration of an Old West bank robbery in progress.

When the First National Bank of Joseph, Oregon, picked David Tucker as vice-president in 1928, it didn't look like a particularly unusual thing to do.

Tucker was a widely respected part of the community in Joseph. A successful stockman, he had, over the previous 20 years, forged a reputation for himself as an honest, trustworthy man - and kind and generous to boot. He was especially effective at taking hotheaded young lads under his wing, helping them out of bad situations and inspiring them to turn their lives around.

When doing this, he almost certainly showed them his right hand. The thumb and forefinger were missing from it - blown off by a rifle bullet on October 1, 1896 - during a bank robbery.

During the bank robbery. The robbery of the First Bank of Joseph, Oregon.

The bank robbery had its start when Dave Tucker, then a 25-year-old cowboy, met a couple of professional stickup artists who had come to the Joseph area and taken jobs shearing sheep. Their idea was to lay low for a while after a job elsewhere in the state had made things a bit too hot for them. Cyrus Fitzhugh and James Brown were their names.

Brown and Fitzhugh soon found a saloon that suited their temperament, and its proprietor and bartender, John Martin, soon learned what the two of them really did for a living. Martin, as it turned out, had a little personal grudge against one of the local bank's major stockholders, stemming from a lawsuit he'd lost. So the four of them started making plans.

The plotters made their move on Oct. 1, 1896. Bartender Martin hung around the bank and signaled the other three when he saw the bank teller come and open the place up. Then the three robbers rode up the street, tied their horses nearby and walked into the bank, guns out.

There was already a problem, though. With an eye toward disguising themselves, the three had rubbed their faces with dirt, and had done such a fine job of this that a group of schoolgirls thought they might be African-Americans. No black person had ever been seen in Joseph, so this was very exciting, and the girls started following them. One of the three robbers - almost certainly Tucker - turned to shoo them away.

"Go back," he told them gruffly. "The bank is about to be robbed, and you might get hurt."

For three desperados about to knock over an uninsured bank in a tiny cowboy town full of heavily-armed, frontier-hardened law-and-order types, this was an extraordinarily stupid thing to say. But, luckily for the bad guys, when the girls got back to the school, nobody believed them.

The three robbers stepped inside. Tucker stood by the door of the bank, pistol in hand, watching the street. Brown and Fitzhugh quietly got the cooperation of the five customers who were inside the bank and waited for the teller, J.D. McCully, to come out of the vault, which he soon did - looking down at the paperwork in his hands.

"Stick 'em up," said Fitzhugh, pointing his sawed-off 12-gauge at McCully. McCully, without looking up, laughed at what he thought was a pretty funny joke and kept walking toward his window. When he arrived, he finally looked up. He was, to put it mildly, startled by what he saw.

"Father has since frequently remembered that never before did he realize that a shotgun barrel was so big," remarked McCully's son, Russell, many years later.

The robbers were disappointed; the $8,000 or so that they'd expected to find turned out to not be there, and they were only able to put together about $2,000. They took a little extra time scrounging up every nickel in the place. While they were doing that, Tucker, by the door, was starting to get very nervous.

The word was out. Some observant neighbors had seen Tucker, a bandanna around his nose, standing in the door of the bank with a drawn pistol in his hand. It wasn't hard to figure out what that meant.

"Those men are going to rob the bank!" yelled a passerby. This attracted Tucker's attention, and he pointed his pistol at him and ordered him to come stand with him on the steps of the bank. Several other people then came out of buildings, and Tucker made them come join him as well.

But the damage had been done. In W.H. Burton's Home Comfort Steel Kitchen Range store across the street, a young fellow named Alex Donnelly was looking over some used stoves when the two of them heard the cry. They looked up; Tucker pointed the pistol at them and invited them to join his growing throng of hostages; and instead, they ducked down behind the steel stoves and hustled out the back.

Donnelly ran down to the general store and gave the alarm. In an instant, the gun counter at the hardware store was emptied out, and armed Joseph residents started closing in on the bank.

Burton raced to the home of a local named Fred Wagner and asked to use his rifle. Wagner declined.

"I know my Winchester better than you," he said. "I will use it."

And he grabbed it, and stepped into the street.

Meanwhile, Tucker was watching all this and starting to panic. "Hurry up!" he shouted. "They are coming with guns!"

Grabbing the sack of loot, Brown hustled out of the bank, followed by Fitzhugh, with the group of hostages in front of them to serve as a human shield.

Then, from behind the human shield, Wagner opened up on them with his .45-70 Winchester.

The first shot missed. Tucker whipped around with his revolver and fired at the same instant Wagner's second shot roared out. Tucker's bullet missed Wagner's head by an inch or so; Wagner's bullet plowed into Tucker's gun hand, sending his pistol flying in a spray of blood and parts that included his trigger finger and his thumb.

Wagner jacked the lever on his rifle and fired again. This bullet plowed into Brown's chest, throwing him down into a sitting position on the bank steps. Seconds later he was dead. Fitzhugh raced back, braving Wagner's fire, grabbed the bag of loot and sprinted for his horse.

Bloodied, disarmed and terrified, Tucker - the future bank vice-president of the bank he'd just helped rob - ran from the scene on foot, leaving his horse behind, an angry and well-armed mob in pursuit. He took a charge of bird shot in the side from one of the hardware store's shotguns, and then a burly blacksmith got the jump on him and he was taken roughly into custody.

Meanwhile, Wagner had emptied out the rest of his rifle shooting horses that were tied up nearby, apparently on the theory that one of them was Fitzhugh's. It wasn't, and as a result when Fitzhugh was clambering onto his horse and Wagner had a clear shot at him, his rifle was empty. He hustled back to the house for more bullets, but by the time he returned it was all over. Neither Fitzhugh nor the $2,000 was ever seen again.

The entire town was shocked by Dave Tucker's involvement in the robbery; everybody knew him, and almost everybody thought he was a nice young man, a talented stockman with plenty of promise, madly in love with a local girl who was kind of like the Doris Day of Joseph: Minnie Proebstel.

A few months later, McCully, the bank teller, went to see him in the jail, and Tucker told his entire story. He'd gotten involved because he wanted enough money to buy a farm and marry Minnie.

Minnie also went to see him in the jail. She told him if he'd stand up and take what was coming to him, when he got out of prison, she'd be waiting for him.

Well, Tucker drew a six-year prison sentence for his part in the deed. Four and a half years later, he was out, and moved back to Joseph, and set about slowly winning back the trust and goodwill of the community. He worked hard, saved his money, bought a small flock of lambs, parlayed it into a big one, bought a farm. When he felt he'd rehabilitated himself enough to deserve her, he proposed to Minnie, and she took him up on it.

Eventually, in 1928, he made an investment in the First National Bank of Joseph - the institution that had succeeded the First Bank of Joseph, the bank he had robbed 32 years before. And at that point, the bank shareholders cheerfully certified this former bank robber as fully rehabilitated - by electing him vice-president of the bank.

And as for Fitzhugh, his name was all but forgotten for decades. But then, around 1940 or so, word came to Joseph from somewhere in Texas that he was being released from prison there, and was he still wanted in Wallowa County?

The citizens of Joseph thought about this. Fitzhugh would be in his 70s. The local residents who had participated in the robbery with him - saloonkeeper Martin and stockman and bank executive Tucker - were friends and neighbors and respected citizens now. And the expense of a trial would be more than the total of loot that had been lost from the bank. 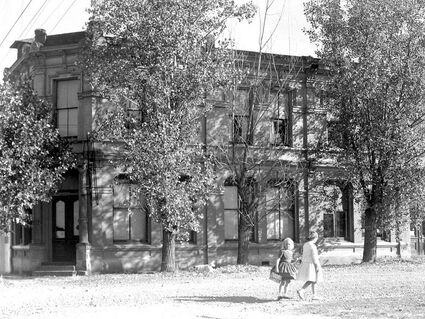 The First Bank of Joseph building in the mid-1950s.

"Therefore, Fitzhugh was given an opportunity to spend the balance of his life a free man," McCully's son wrote. "That responsibility was up to him. Perhaps we will never know his decision."