$6.5 million repairs at dam will focus on site's floodgate 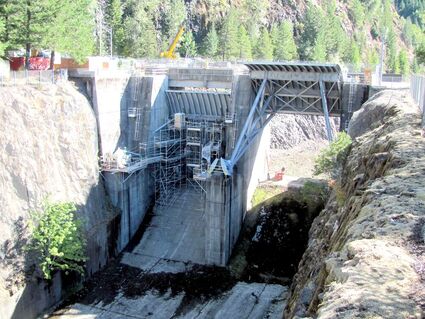 Repair work at Cougar Dam will focus on the structure's tinter floodgate. Used to control water flow, water bears on the convex (upstream) side when it is closed. When rotated, the rush of water passing under the gate helps to open and close the gate.

BLUE RIVER: 60 billion gallons of water is a lot. That's how much flows over Niagara Falls in 24 hours. It's also the volume in the reservoir formed by Cougar Dam.

"If Cougar were to completely fail, that water would rush 60 miles down the McKenzie River, washing away everything in its path, until it reached the Eugene and Springfield area," according to Tom Conning with the Public Affairs Office of the U.S. Army Corps of Engineers. 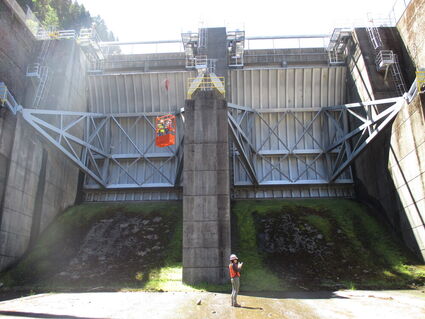 That image, and the desire to do everything possible to keep it from becoming reality, was the backdrop of safety inspections that have been ongoing since the dam was finished in 1963.

Under the Infrastructure Investment and Jobs Act (IIJA) and the Disaster Relief Supplemental Appropriations Act. Army Engineers and planners will receive $146 million for various infrastructure projects at U.S. Army Corps of Engineers (Corps) sites around Oregon. The money includes $6,652,000 for spillway gate repair at Cougar Dam.

Pans for the repairs will involve replacement of the floodgate strut arms, hoist equipment and wire ropes. Structural repairs, and painting of tainter gate structure and skin. BCI Construction of Belleville, Illinois will do that work. In addition, Weeke Sales and Service of Okawville, IL is scheduled for the installation of a new dam switchgear and power feed as well as new tainter gate control panels.