$7.2 million in federal funds for LCSO, $6.5 million for Public Works 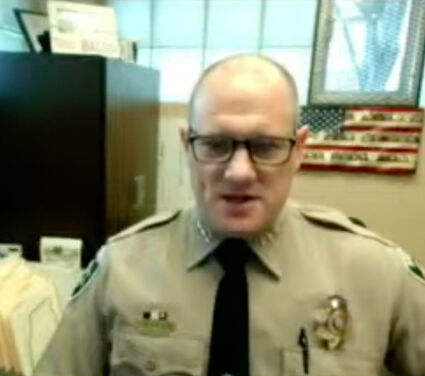 EUGENE: In a unanimous vote last Tuesday, the board of commissioners approved hiring more police and fixing Lane County's most dangerous roadway. With money that comes from the extension of federal Secure Rural Schools Act, the Sheriff's Office will add five deputy sheriffs, two detectives, and one sergeant. Public Works will receive money earmarked to deal with a 28-mile stretch of deteriorating pavement along Territorial Highway.

During the February 1st virtual meeting, county administrator Steve Mokrohisky noted that money sourced through the federal Secure Rural Schools Act (SRS) had declined about 90% since the 1970's when timber harvests generated much more income. The county in the past, he said, had avoided using one-time funding to pay for ongoing services like rural police coverage.

"Last year the board approved a five-year plan to fund public safety and road maintenance," Mokrohisky noted. "The Sheriff's Office and Public Works team have really worked collaboratively to find the win-win," he said.

The board's vote allocates $13.7 million in road fund payments under the SRS act extension. Up to $7.2 million over 5 years will go to improved rural patrol services. An estimated $6.5 million was designated to replenish the Public Works road fund reserves and fund future Territorial Highway improvements.

During his presentation, Sheriff Cliff Harold told the board that between 2008 and 2012, his office had to cut 200 positions and lay off 100 personnel. Currently a typical shift sees 3 deputies and a sergeant assigned to cover 4,800 square miles. "Contract deputies do not work during the graveyard shift so are not available to assist in emergencies," Harrold added. In 2021, the sheriff pointed out there were 60,548 calls for service - amounting to an average of 165 calls per day.

County Engineer, Peggy Keppler, said the money coming to Public Works would help, "Reduce the impacts of revenue fluctuations and economic downturns." As an example, she pointed to the $2.6 million in reserves that had been utilized during the first year of the Covid-19 pandemic to offset losses in gas tax receipts.

$2.5 million of the Public Works SRS allocation would go to the reserve fund, with the other $3.9 million set aside for Territorial Highway.

That 42-mile long roadway was transferred to Lane County from the Oregon Department of Transportation in 2019. Although its acceptance came with a $30 million improvement allocation, there's still a lot of work to be done.

The county has already been busy in addressing some of those concerns, Keppler said, and has finished a realignment and slide repair project at Stony Point for $5.4 million.

Asked by West Lane Commissioner Jay Bozievich if adding more deputies might overload the public defender's office or circuit court dockets, Harrold said he'd been told adding 5 deputies and 2 detectives wouldn't have a significant impact. He did feel, however, that it, "would be significant for people who live in unincorporated areas that suffer a burglary. That's classified as a property crime but it feels very personal if it's your home." Harrold added. "Often a main office deputy will take a report by phone and generally there is no follow up."

At those lower staffing levels Harrold said there's often been no response because for situations like a domestic dispute, his office wouldn't send out a single deputy. "Once we have these positions trained and deployed we'll be able to increase our minimum staffing from 3 deputies and a sergeant to 4 deputies and a sergeant," he said. By having 4 personnel per shift, he expects it would be more likely 2 deputies would be able to respond to a call.

"In the past," Mokrohisky said, "The SRS payments were like paying your mortgage with your IRS tax return. So relying on that for our ongoing expenses was not a good practice." Now, he added, "We can make an investment that adds additional value to the community."