Suspect shot deer from a driveway 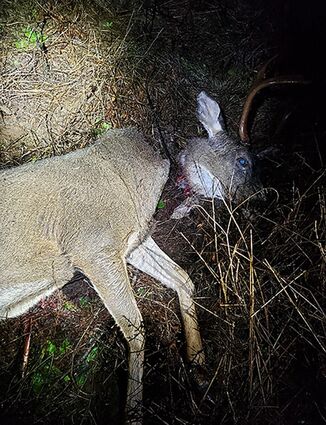 CAMP CREEK: A poacher fled the scene leaving behind both the buck deer he shot on private property, and the head he had just cut off the animal as a trophy. Oregon State Troopers are now asking the public to be on the lookout for a vehicle related to the December 9th incident.

Troopers describe the subject as about 5'1" tall, with brown hair and a brown beard. He left the scene in a late 1990's white Chevy flatbed pickup. The truck is likely a 3500 diesel and a witness reported seeing several toolboxes or gang boxes on the bed of the truck. They also said the poacher had difficulty starting the vehicle, so it might have mechanical issues.

According to authorities, the man shot the deer from a private driveway near Upper Camp Creek Road. Troopers aren't sure if the man realized how close he was to nearby residences. He killed the animal near a house and along an active driveway leading to multiple other houses. When a passerby asked the man what he was doing, he fled the scene.

The passerby told police he was not aware of any illegal activities but found it strange that the man ran away, jumped in his white flatbed truck and drove away. Shortly after, someone discovered the deer's carcass and head. Neighbors notified an OSP Fish and Wildlife trooper of the incident.

OSP Troopers received the call at 7 p.m. and Senior Trooper Josh Wolcott brought the unit's Conservation K-9, Buck, to conduct a field survey. Within 45 minutes, Trooper Wolcott and Buck were on scene conducting a field search for weapons, ammunition, and other evidence left behind in tall grass and woody shrubs.

"Our K-9 Buck is extremely useful in cases like this," Wolcott said, "He can locate evidence by scent, which otherwise would require several troopers with metal detectors running a grid pattern to find. And it doesn't matter if it's dark out, as it was in this incident."

The Conservation K-9 was gifted to OSP by the Oregon Wildlife Foundation, a non-profit dedicated to preserving wildlife and habitat across the state. Buck is the only OSP canine unit trained specifically to detect carcasses. He can also detect human scent, gunshot residue and other evidence of poaching.

Senior Trooper Wolcott and area residents worked together to field dress the deer and pack it out. OSP Troopers donate salvaged meat to local charities and non-profits. In this case, the meat went to a local church, which will distribute the meat to local families in need.

"The silver lining to poaching cases like this-where we are able to locate the animal while it's still salvageable-is that the meat is put to good use," Wolcott said.

Members of the public are asked to contact Oregon State Police Tip-line at 1-800-452-7888, *OSP (*677), or email at [email protected] Reference case #SP21-342721. Members of the public who wish to support the Conservation K-9 program may do so through the Oregon Wildlife Foundation.

The Stop Poaching Campaign educates the public on how to recognize and report poaching. This campaign is a collaboration among hunters, conservationists, land owners and recreationists. Our goal is to increase reporting of wildlife crimes through the TIP Line, increase detection by increasing the number of OSP Fish and Wildlife Troopers and increase prosecution. Oregon Hunters Association manages the TIP Line. This campaign helps to protect and enhance Oregon's fish and wildlife and their habitat for the enjoyment of present and future generations. Contact campaign coordinator Yvonne Shaw for more information. [email protected]

The TIP Reward for information that leads to an arrest or citation in this case stands at $500 or four ODFW hunter preference points.