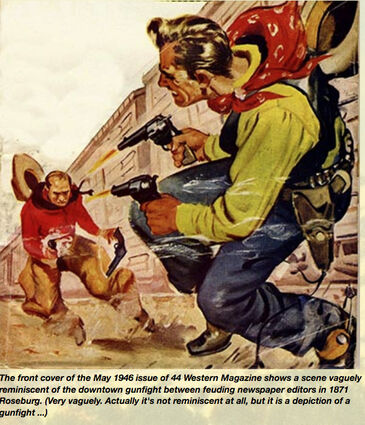 The “Oregon Style” of newspaper journalism was already a thing in 1871, when upstart newspaper publisher William “Bud” Thompson got in his famous gunfight in downtown Roseburg.

But until that day, the vicious personal attacks that characterized the “Oregon Style” had mostly involved the spilling of ink — not blood.

On that late Monday morning on a corner in downtown Roseburg, that changed.

The groundwork for the Roseburg Newspaper Shootout was laid when Thompson came to town in 1870, when he was just 22 years old. He’d just sold the newspaper he’d run in Eugene — the Eugene City Guard — and, with $1,200 in his pocket, had come to Roseburg to do it again. He launched his paper and it steadily started building circulation.

This was not OK with Henry and Thomas Gale, the two brothers who had founded the weekly Roseburg Ensign three years before. Like Thompson, the two of them were from the Eugene area, and like him were in their early 20s; but unlike Thompson, they were staunch Republicans. Henry, the older of the two, was a tall and powerful man, but Thomas was tiny — under five feet tall.

Tensions between the two newspapers built as they fired salvoes at one another from their editorial pages. This was to be expected: after all, the Gales ran a Republican newspaper, and Thompson was a lifelong Democrat and a son of the South. But there was something else happening, too, which added fuel to the brewing feud: Almost as soon as Thompson opened for business, Democrat Lafayette Grover was elected governor of Oregon, ending an eight-year run of Republican governors. The victorious Dems, in Salem, now had a choice of papers to favor with their lucrative public-notice business. That meant most of the business that had sustained the Ensign now was going to the upstart Plaindealer.

Also, looking at all the different accounts of this event, it’s clear that Thompson was an unusually thin-skinned fellow. After being sarcastically called “the ripe scholar and gallant gentleman who stands — when sober enough to stand at all — behind the Plaindealer chair,” and “a sardine among codfish,” and various other quaint-sounding (to us) epithets, Thompson reportedly informed the Gale brothers that he would no longer tolerate this sort of abuse.

Of course, the Gales kept it up. They would have been a disgrace to Oregon-style journalism if they had not.

Things came to a head one Saturday, when Thompson chanced to meet Thomas Gale in the post office. Reports on the action are varied. Thompson’s memoir claims that Gale tried to draw a pistol, and he (Thompson) grabbed his hand and slapped him in the face. Contemporary newspaper accounts, including one by Thompson’s own newspaper (published while he was recovering from his wounds) say Thompson spat in Gale’s face and slapped him, and Gale — probably because Thompson towered over him like a giant — didn’t get in a single blow. Bystanders quickly separated the two before a full-on brawl could develop, and Thomas Gale stormed off to get his gun — which he had not had in the post office, or he probably would have used it.

It was not the kind of public affront that went unanswered in a frontier town like 1870s Roseburg. Everyone knew a showdown of some kind was coming.

It arrived two days later, on Monday. When Thompson stepped out of his office to go to the post office, he found the Gale brothers waiting for him.

“Pick on somebody your own size!”

Again, Thompson’s memoir describes the encounter with shameless mendacity. He basically claims the brothers took turns shooting him in the back as he turned from one to the other, that one pretended to surrender so he would lower his guard and then shot him, and (by implication) that he left both brothers dead. His own bravery, and the brothers’ cowardice, fairly pours from the page. And again, if contemporary newspaper accounts are to be believed — including the one by his very own newspaper — it’s almost all lies.

The newspaper accounts all say that the encounter started with Thompson apologizing to Thomas Gale for spitting in his face. The apology was not accepted, though, and Henry, the bigger brother, told him he should be ashamed of himself, and that he should pick on somebody his own size.

What happened next is very unclear. There are just too many conflicting accounts to pick a line through them, especially on the question of who shot first. The most likely scenario is that Henry Gale intended to use his cane to administer a humiliating public beating to Thompson, and had started doing so when Thompson pulled his pocket derringer out. At that point, Thomas Gale (the small brother) pulled his revolver out and the shooting started.

First, Thomas Gale shot Thompson in the chest, but the ball was deflected by a thick sheaf of letters and inflicted only a flesh wound. Thompson turned and fired his one-shot derringer into Thomas’s right side, just above the liver; he then started using his now-empty pistol to beat Henry Gale over the head. Henry then pulled a four-shooter and shot Thompson three times with it from close quarters: once in the back of the head, from the side, apparently at an angle because the skull wasn’t penetrated; once in the shoulder; and once in the neck. The neck shot went behind Thompson’s jaw and lodged in his tongue, filling his mouth with blood.

And with that, the drama ended. Much to the surprise of almost everyone, all three of the men survived this bloody encounter. Thomas and Henry Gale went to a nearby drugstore for treatment, and Thomas’s wounds were quite serious; they may have eventually caused his death, which came eight years later. Thompson went home to have the bullets extracted.

“Although neither paper was put out of commission, both had had the stuffing knocked out of their editors,” writer David Loftus remarked in his article about the incident.

Thompson soon left Roseburg, selling the Plaindealer for $4,000 and moving to Salem to take over the Salem Mercury. The Gales sold their paper around the same time, and, languishing with the winds of political fortune, it eventually closed.

Throughout the rest of his life, Thompson would be a dangerous fellow to have around. At the Mercury, he reportedly beat the editor of the Forest Grove paper with a cane after the editor wrote some disparaging things about him. Later, as a cattle rancher, he would become notorious as the head of the Prineville Vigilantes, a gang of masked outlaws responsible for at least seven lynchings and extrajudicial killings in Crook County. After that, he moved to Alturas, Calif., and there were more lynchings and vigilante action there.

Thompson’s enemies, of whom there were many, characterized him as that rare blackguard who had the skill to know whom he could attack and when he needed to leave town … and they were probably right. But one thing is for sure: He definitely made journalism in frontier Oregon a more interesting occupation.

Finn J.D. John is an instructor at Oregon State University and the author of “Wicked Portland,” a book about the dark side of Oregon’s metropolis in the 1890s. He produces a daily podcast, reading archives from this column, at ofor.us/p . To contact him or suggest a topic: [email protected], @OffbeatOregon (on Twitter), or 541-357-2222.