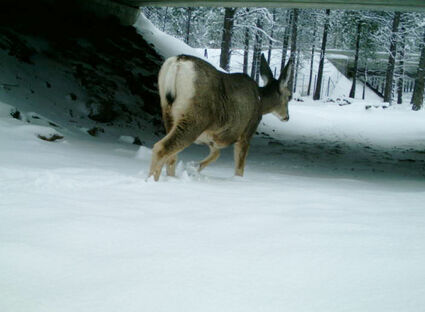 The Lava Butte crossing in Central Oregon was used by 29 species in its first year.

House Bill 4130 would allocate $5 million for wildlife crossings in problem spots across the state. In Oregon, there are about 7,000 collisions with deer each year, costing Oregonians $44 million in total.

"These types of projects are not partisan," he said. "We've got Republicans and Democrats, senators and House reps on the bill already. It'll be a great bipartisan, bicameral effort and very popular. So, the enthusiasm is certainly there in this state."

There are an average 700 injuries and two deaths from wildlife collisions each year. Oregon lags far behind on crossings, at five, compared with other states in the West. California and Utah each have 50.

HB 4130 is scheduled for a public hearing today.

Zach Schwartz, Oregon program manager for the Wildlands Network, said the crossings already have proved to be effective on a stretch of highway between Bend and Sunriver.

"The Lava Butte crossing on Highway 97 saw a decrease in wildlife-vehicle collisions of about 85%," he said, "so they allow for wildlife to move much safer, they allow for drivers to drive on the highways safer, and they pay for themselves really quickly."

Tyler Dungannon, conservation coordinator for Oregon Hunters Association, said the bill is a winner for the folks he represents. He said safe crossings also improve wildlife habitat and connectivity.

"As conservationists, sportsmen and women aspire to bolster our deer, elk and other game populations for the benefit of all Oregonians," he said, "and one way to do that is to reduce wildlife-vehicle collisions on our highways via wildlife crossing structures."

Supporters of the bill also are hopeful passing it would put the state in a better position to compete for the $350 million in federal dollars from the Wildlife Crossings Pilot Program, passed as part of Congress' infrastructure bill last year.