Did Oregon miss a chance to stop a serial killer? 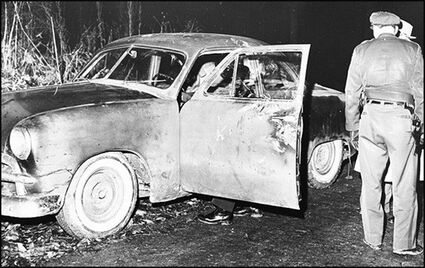 Investigators look over Larry Peyton's car after his body has been removed, on Sunday, Nov. 27, 1960.

As urban legends, go, it's one of the oldest and scariest:

A teenage couple drives to a secluded spot late at night and parks, planning to do some of the usual canoodling. But before they do, a news bulletin interrupts the music on the radio. A psychotic killer has escaped from the asylum, the DJ reports breathlessly. He's missing his left hand, and wears a steel hook on the stump of his arm as a prosthetic.

The boy wants to ignore the news and smooch some more, but the girl is too freaked out, so he reluctantly starts the car and drives her home. When they get there, she makes a frightening discovery: A steel prosthetic hook, hanging from the door handle on the passenger side.

A chilling and enduring story, and one that's still being told today. But it's just a story ... right?

Right. Because in late November 1960, in the northwest hills of Portland, when the man with the hook showed up, he got 'em. The two young lovers never made it home.

That, in any case, is the strong suspicion of Portland historian Phil Stanford, who delved into the notorious 1960 double murder of sweethearts Larry Peyton and Beverly Allan to write the definitive book on the case.

What Stanford found was that a particularly disturbing suspect who turned up early in the process was simply not taken seriously. And if he had been, there's a good chance that a dozen murders - including, some investigators think, maybe even the Zodiac killings in Southern California 40 years ago - would have never happened.

Here's the story (or, rather, a sketchy overview of the story - there is much more in Stanford's book):

The story starts out just like the Man with the Hook story: with Peyton and his girlfriend, Allan, cruising downtown Portland on a Saturday night in Larry's 1949 Ford two-door sedan, and ending up "parking" in a secluded place in Forest Park.

The next day a policeman, driving through Forest Park in search of stolen cars, came across Larry's Ford. The door was open, there was blood everywhere, and Larry was slumped in the driver's seat. He'd been stabbed 23 times with a four-inch-long knife.

As for Beverly Allan ... there was no sign of her.

No sign, that is, until more than a month later, when her badly mutilated body was found in a ditch, within sight of passing cars on Sunset Highway outside Portland.

Police detectives, already coming under considerable pressure to get things done, started immediately with a campaign that involved filtering through an unbelievable volume of low-quality leads. The Multnomah County Sheriff, who had ruined the crime scene by rummaging around in the car before the investigators got there, now tried to make up for it by dashing off letters to other law-enforcement agencies around the country asking about similar crimes. Eager convicts in prisons nationwide started talking their heads off, whether they knew anything about the case or not, in hopes of cutting a deal. And several mentally unbalanced people started pestering the cops with tip after red-hot tip.

One of the early leads the cops stumbled across was a prison-hardened tough guy with the oddly memorable name Edward W. Edwards. Edwards had been snooping around the crime scene the day after Peyton's body was discovered, and 10 days later he was caught setting off fire alarms as a prank. He had a minor unexplained bullet wound in his upper arm. Police revoked his parole, tossed him in the county lockup and making plans to interrogate him first thing Monday.

Meanwhile, the cops were looking into a couple of unruly teenage drinking parties that had been held near the crime scene that night. These parties were packed with troubled teens and young adults, male and female, some of whom knew and disliked Larry Peyton. Many of them had criminal records for minor robberies and burglaries. There were weapons - a couple knives, an automatic pistol found in a garbage can - and there were stories of fistfights and plenty of possible motives.

By the time Edwards was arrested, the cops were already working on several promising theories, and he was very much a back-burner kind of suspect. So when he escaped from the jail over the weekend and disappeared, they didn't much worry about it.

They certainly didn't ask themselves why a seasoned crook who knew very well how the system worked would want to avoid questioning badly enough to break out of jail and go fully on the lam.

Edwards moved east, and eventually was caught after an especially lucrative bank robbery that landed him on the FBI's Top 10 Most Wanted list for a short time. (Although he liked to claim he had an I.Q. in the high 130s, he wasn't able to figure out that paying cash for a new Cadillac and a truckload of new things for his apartment might attract some attention.) A hair sample was sent to Portland, and, after a comparison with a hair found on Beverly Allan turned out not to be a match, he was eliminated as a suspect.

Eventually, with the help of an astonishingly sketchy collection of "witnesses," the authorities charged three of the partygoers with two counts of murder. One was acquitted; the other two were convicted, and sentenced to life-plus-25. Within just a few years, both were paroled. Nobody believed they'd done it - not any more.

But if not them, who?

The Man with the Hook

Early in 2009, the Wisconsin State Police dusted off a cold-case file from 1980. Someone had followed two young lovers as they walked home from a wedding reception, pounced on them, stabbed the man to death and raped and strangled his fiancée. By the time the bodies were found by hunters, six months later, they were badly decomposed ... but not badly enough for the killer's DNA to be gone from the scene. Samples had been preserved in anticipation of a day when technology would advance enough to test them. That day had come.

The cops ran the test, and hey, jackpot! It came back a match to none other than Edward W. Edwards.

In July of 2009, the Wisconsin State Police arrested Edward W. Edwards - who by then had aged into a 76-year-old blob of a man in a wheelchair on oxygen - and charged him with two counts of murder.

With Edwards' name in the news, authorities in other places started contacting Wisconsin. It seems he'd been at the scene of a number of other crimes that looked a lot like the Peyton-Allan murders. In some of those crimes, he'd even been a suspect.

Edwards was in Great Falls, Montana, in 1956, when a young couple was murdered. The 19-year-old male was found lying beside his car, hands tied, shot in the back of the head; his girlfriend was found six miles away, also shot through the head.

Then there was the death of two high-school kids in Akron, Ohio, who'd gone on a date in 1979 and never come back; they weren't found until six years later. They'd been shot and stabbed. Edwards was mentioned as a "person of interest."

And Edwards, in 2010, confessed that he was the guy who murdered two young lovers in Doylestown, Ohio, in 1977 - again, execution style, with a shotgun blast to the back of the neck.

It's also worth noting that he was around the San Francisco Bay area during the Zodiac Killer's reign of terror.

And, of course, he'd been nosing around the crime scene at the Peyton-Allan killing too.

That puts him at the scene of at least five double-murders involving young lovers, over a 25-year stretch. What are the odds? 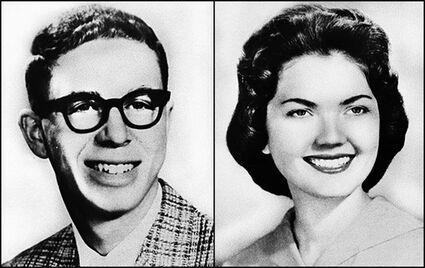 The Man with the Hook died on April 7, 2011, just a few weeks into a life sentence in Wisconsin. He never did say whether he was the man who killed Larry Peyton and Beverly Allan, and Multnomah County decided not to reopen the investigation.