The Samurai pilot who bombed Oregon 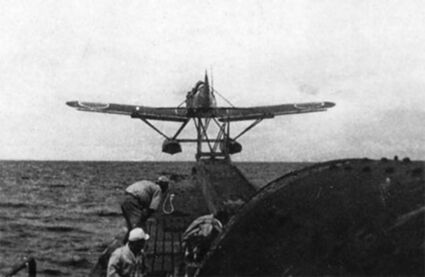 A Yokosuka E14Y is launched from the deck of a submarine during World War II.

It was a little after 6 a.m. on September 9, 1942. A tiny seaplane with red balls painted on its wings was making its way through the skies over Brookings, Oregon. At the controls was a young man named Nobuo Fujita; behind him, in the observer's seat, looking intensely at the ground, was another, named Shoji Okuda.

The two of them were looking for a good place to initiate the first airstrike ever to be made on the continental United States.

This whole gambit had been Fujita's idea. Fujita was a warrant officer aboard the Imperial Japanese submarine I-25, in charge of the little reconnaissance airplane the sub kept on board in a watertight compartment. During the attack on Pearl Harbor he'd suggested bringing the sub across the Pacific and using the little airplane for bombing raids on the American mainland; his executive officer had loved the idea, and asked him to write it up as a formal proposal. So he'd done that.

Nothing had happened for a long time, and Fujita had given the matter little further thought - until April 1942, when that squadron of American bombers under Capt. Jimmy Doolittle's command had raided Japan itself. The raid had done very little damage - but it had been a slap in the face, and nearly everyone in the Imperial Japanese Navy burned for revenge.

So when Fujita and the rest of the I-25's crew returned from the cruise they were on, there was a message waiting for them. Fujita was being called to Imperial Navy headquarters immediately. A little worried he might be in some trouble, Fujita complied.

He was elated to learn that his idea was about to be implemented - and that he'd be the man at the controls, charged with delivering four 170-pound bombs to targets on the American mainland.

His joy turned to disappointment, though, when the other shoe was dropped: His assignment was not a suicidal-but-glorious attack against an aircraft plant in Los Angeles, or a U.S. Navy base in San Diego, but dull bomb-delivery run against a bunch of trees in the middle of Nowhere, Oregon. What? Could that be right?

Yes, the commander said. In 1936, a catastrophic forest fire had swept the woods of the southern Oregon coast and destroyed the town of Bandon. It did millions of dollars' worth of damage and even killed 10 people. If Fujita could set a fire like that, his relatively puny bombs would do far more damage to the enemy than anything he could do to an aircraft factory or munitions plant - and he'd be far more likely to make it back alive, to boot. Skilled pilots cost a lot to train, and airplanes weren't cheap either.

"Fujita, if you succeed in this mission, you may well help to win this war by spreading panic through the enemy cities," the commander told him, "proving to them that we can bomb their homes and factories from 5,000 miles away."

His enthusiasm restored, Fujita had returned to the I-25 ready to do his historic bit. The submarine's next voyage was going to be for the express purpose of delivering himself and Okuda off the coast of America, ready to strike at the enemy's homeland.

And so it was that at 4 a.m., in the pre-dawn blackness, a mile or two off the Oregon coast, the I-25 surfaced and its tiny seaplane was removed from its storage bay and assembled, ready for action.

The airplane itself was a Yokosuka E14Y ("Glen"), a compact and lightweight float plane made with a wood frame and fabric skin. Rickety though it looked, it was stoutly built. It had to be, to withstand the forces generated when it was launched, with the aid of a compressed-air-powered catapult track, from the submarine's deck. And it had a relatively powerful radial engine - a 340 horsepower nine-cylinder radial, which pushed it to a maximum speed of just over 150 miles per hour.

Fujita and Okuda had prepared for this moment - leaving hair and fingernail clippings behind for their families to bury in a funeral should they not return. Now they strapped themselves into their tiny airplane, started the engine, braced themselves and were shot into the gloaming sky. Fujita immediately shaped course eastward, heading toward the dark and silent American continent.

The plane's flight path took it almost directly over a small Oregon town - Brookings. Fujita wasn't about to waste his precious bombs on that, though. The whole great Oregon timberlands lay to the east, and that was where he was headed. He flew on.

Below, early-rising residents heard the engine - one said it sounded like a Maytag washing machine, one of the pre-war gasoline-powered models designed for rural households without electric service. But it was too high up for them to see the Rising Sun insignia on its wings, and it certainly didn't sound like any kind of warplane - so few people gave it a second thought.

Soon the two airborne warriors were cruising over a heavily wooded area near Mount Emily. Fujita gave the signal, and Okuda sent his first bomb hurtling down out of the sky and into the history books. It plummeted to the ground and the two Japanese aviators were rewarded with the sight of a modest fireball below, followed by the glow of flames.

They flew on, over a ridge, and dropped their second bomb. Then, losing no time and figuring the American military would soon have fighter planes on the scene, they turned back westward. Fujita opened the throttle up wide and they raced back toward the sea.

Behind them, the fires they'd started flickered fitfully. Most years, early September would be a very dry time in the Oregon timber, but this year it wasn't. Furthermore, as any logger knows, early morning is the safest time of day in terms of risk of fire; everything is soaked with dew, and temperatures are low. Forest Service lookout crews and Aircraft Warning Service volunteers quickly spotted the smoke and crews had the fires stamped out before the day was over.

Fujita and Okuda, back on their submarine, reported their success and no doubt basked in the glory of having struck back at the Americans, getting a tiny taste of revenge. They tried again 20 days later, dropping their last two bombs with basically the same effect.

After that, the I-25 stayed around just long enough to torpedo a couple of passing freighters, and then headed back to Japan. It never returned to Oregon waters, and was eventually sunk by an American destroyer off what's now Vanatu. 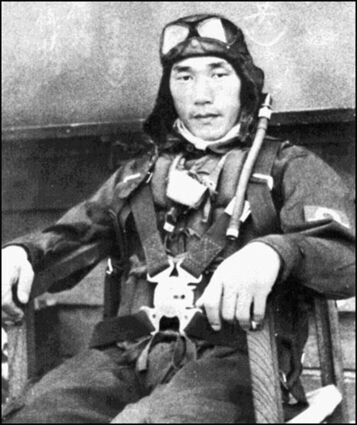 Nobuo Fujita in his flight suit with parachute on, during the war.

Both Fujita and Okuda were tapped for the Kamikaze program late in the war. Okuda went out on his mission and was, of course, killed while carrying it out; but the war ended before it was Fujita's turn to go, so he survived the war. Twenty years later, he came back to Brookings on a mission of friendship. We'll talk about that visit, and the subsequent relationship between Oregon and the Samurai who bombed it, next week.