Escape from Rainbow ends in Thurston 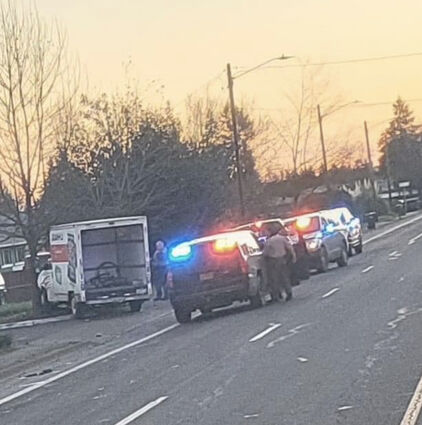 A chase that stemmed from an incident near the intersection with Mill Creek Road and the McKenzie Highway ended 36 miles later last Tuesday. According to the Lane County Sheriff’s Office, the suspect’s vehicle, a white U-Haul box van, left the area westbound after striking a parked vehicle around 5 p.m.

McKenzie District Sheriff’s Deputy Russ Olson observed the U-Haul still headed westbound in the Vida area about 10 minutes after receiving the report and initiated a traffic stop. At first, the driver pulled over but sped away moments later.

The deputy then pursued the driver with his emergency lights and siren activated. After about a mile, the driver stopped the van and reversed, intentionally striking the front of Olson’s Tacoma Tundra. The impact dented the front of the Toyota and damaged a bumper-mounted winch.

The driver, who was later identified as 30-year-old Jeffrey Feaster then took off - again westbound on the highway. Although damaged, the deputy’s vehicle was not disabled and he was able to continue following the fleeing van.

The chase ended when the driver crashed the van near the intersection of Main and 69th streets in Springfield.

Feaster was taken into custody on multiple charges including Hit & Run, Elude by Vehicle, Reckless Driving, Reckless Endangering, Criminal Mischief in the 1st Degree, and Assault on a Public Safety Officer.

Feaster’s last known address is in Chicago, Illinois. He was transported and lodged in the Lane County Jail. Police said they didn’t know where he’d rented the U-Haul but he told them he was headed toward Portland.