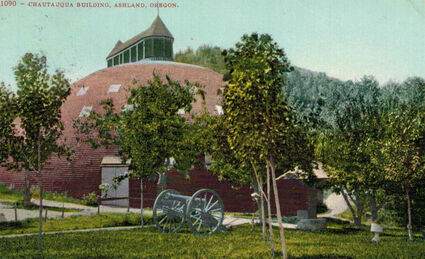 A postcard image of the Ashland Chautauqua building in Lithia Park as it appeared circa 1908.

In the decades before the First World War, an organization called Chautauqua arose that was something like a summer camp for grown-ups.

People would take vacation time and travel to the Chautauqua center and stay there in tents, either brought from home or rented on-site, for a week, or two weeks, or even longer. There, they'd take classes, attend lectures, listen to band concerts, play baseball, and generally try to make up for the previous year's intellectual deprivation.

In Chautauqua's heyday, there were a number of these centers across the country, and President Theodore Roosevelt famously declared them to be "the most American thing about America." And the biggest one west of the Rockies was in Gladstone, Oregon.

The Chautauqua movement had its start in New York state in the early 1870s, when Bishop John Vincent of the Methodist Church and Lewis Miller, an inventor, and manufacturer from Ohio, launched it as a training program for Sunday School teachers. Their idea was that the Bible should be taught in the context of worldly cultural and scientific knowledge, rather than in isolation.

The outdoor-summer-school style was Miller's idea, and he had to sell it to Vincent, who associated that sort of thing with raucous, undignified tent revivals. But Miller convinced him at last, and the first of these new Sunday School training camps were held in 1874 on property the Methodist Church-owned, on Chautauqua Lake in New York.

It was an immediate hit. The two organizers had planned for maybe 100 people, and 500 showed up for the one-week event. Realizing they were onto something, Vincent and Miller brought it back the next year substantially bigger. By 1879 it was attended by 1,000 people and lasted 43 days. By the end of the century, it was two full months-long and hosted many thousands.

As you can imagine, this "summer-camp self-improvement and educational refreshment" model appealed strongly to the very sorts of hard-working builders that were most likely to have gone west on a wagon train 20 years earlier. But those Western homesteaders and community builders couldn't travel all the way across the country to New York to partake. So, they started forming their own organizations based on the Chautauqua model, establishing them like nonprofit repertory theatres.

So the Chautauqua model became a movement and that movement became one of the defining features of pre-First World War American frontier society. It spread rapidly across the country, and soon the Midwest and Far West were dotted with the distinctive beehive-shaped auditoriums that Chautauquas favored.

In Oregon, the first one was launched in 1885 in Canby, but it didn't have the backing it needed to succeed, and it was gone a year later.

But in 1890, Bishop Vincent came to Oregon to lecture on the Chautauqua movement, and his listeners were very receptive. Within three years, several more Chautauquas had been founded, including one in Gearhardt, one in Ashland, and one in Gladstone.

These last two were to prove the most enduring and influential. Both of them were still in operation three decades later.

Gladstone in particular was the biggest Chautauqua west of the Rockies. It was an Oregon city power couple, Charles and Eva Dye, who provided the backbone of the enterprise.

Charles was a successful lawyer, and Eva a writer and poet. Both were graduates of Oberlin College back East, and, as historian Donald B. Epstein puts it, both represented "a type of individual not often associated with Far West frontier society - the person who wanted both the freedom from older Eastern and European political forms, but who still craved the cultural satisfactions of the older societies."

Epstein was wrong about one thing, though: Far West frontier society was crammed to bursting with that type of individual, at least in Oregon. Mary Dodge of the "Sagebrush Symphony" in Burns leaps to mind, as well as Angus Bowmer of the Oregon Shakespeare Festival - who, by the way, launched the Festival in the ruins of the Ashland Chautauqua's beehive auditorium -- leap to mind.

In any event, after establishing themselves in Oregon City society, Charles and Eva wanted to do something along the lines of "a pure philanthropy," as Eva put it, in their community. Bishop Vincent's visit came at a perfect time. Judge Harvey Cross had bought 640 acres of land north of Oregon City and was platting what would become the city of Gladstone on it; Eva talked him into donating 78 acres of it as a campus on which to launch a Chautauqua for northwest Oregon.

Local businesses, mostly in Oregon City, staked the new undertaking with $5 purchases of stock in the new nonprofit Willamette Valley Chautauqua Association, and the first meeting was held on the Gladstone grounds in 1893.

It was a huge smash hit. A big part of the reason for that was its location, just south of Portland, close by the inter-urban railroad lines that were rapidly connecting the entire Willamette Valley. It was a half-day trip for almost everyone from Eugene to Vancouver and not much more than that for most of the rest of the state.

But a bigger part of the reason for its success was Eva Dye, who threw herself into booking speakers and organizing construction projects there. Down south, in Ashland, G.F. Billings filled a similar role, with similar results.

The Chautauqua grew fast. By 1895 the Gladstone site had its own "beehive," a huge one that could hold 5,000 people. Ashland already had one by then, a smaller one at first - but over the years it would be rebuilt and enlarged three times.

In addition to the Sunday School teacher training, the Chautauquas offered lectures on English and American history, chorus singing, poetry readings, band concerts, baseball games, and lectures from leaders of important Oregon subcultures such as Rabbis and Catholic archbishops, Indian leaders, and leaders of Portland's Black community. The 1895 season at Gladstone included a geology lecture by Thomas Condon of the University of Oregon; an art lecture by John Ivey, a retired University of Southern California art professor living in San Francisco; and a lecture on what would later become the Panama Canal by Willamette University president Willis Hawley. The following year, a crowd of 6,000 gathered to hear a speech by William Jennings Bryan.