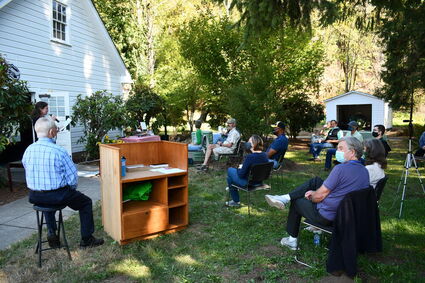 During a September legislative backgrounder at the McKenzie River Discovery Center, public officials were updated on plans for the facility.

LEABURG: Dreams of a state-of-the-art interactive visitor center moved closer to reality during the Oregon legislature's 2022 short session. Their approval of a $3 million lottery fund package was earmarked for the development of the McKenzie River Discovery Center (MRDC).

"The board of directors sin-cerely thanks the legislature for this vote of confidence," said Shirley Braunstein, treasurer of the MRDC. "We appreciate the near 50 letters of support from community leaders, business and private interests whose voices strongly supported the legislative effort. We are another step closer to offering the complete stories about those elements that make the McKenzie so unique: its geology, hydrology, water, fish, fauna, flora, the boats, and guide cultures along with the region's pre-histories."

The MRDC site, along the curve around Leaburg Lake, covers 46-acres and includes buildings on the National Historic Registry. Built as the McKenzie River Hatchery by the Oregon Game Commission, the structures were originally constructed in 1907 and decommissioned in 1953.

The cost of the overall project is $18.5 million, of which $2 million had already been secured. A capital campaign to solicit the rest of the funds from corporate and individual donors is being developed. According to the MRDC, the project is on track to be "shovel ready" by December of this year. A feasibility study predicts 50,000 visitors can contribute as much as $7,000,000 to the area per year.