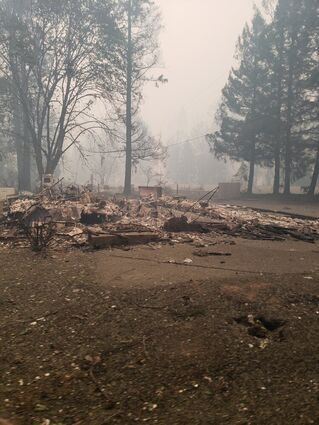 The majority of Blue River's commercial and residential properties, including the McKenzie River Clinic, were consumed by the Holiday Farm Fire two years ago.

BLUE RIVER: The Holiday Farm Fire raged through the heart of the McKenzie Valley in 2020. It left behind some sobering statistics: 173,000 acres burned, one fatality, 431 homes, and 24 structures lost, along with a $103 million lawsuit seeking damages from two utilities. Destroyed as well was a 1970's era medical clinic in Blue River.

McKenzie Valley Wellness (MVW), a local non-profit, owned the building and had operated it as the McKenzie River Clinic until 2019. That year MVW sold the medical practice - including the furniture, equipment, and supplies - to the Orchid Oakridge Clinic and signed a triple net lease for the building.

Orchid Health had grown out of a 2014 school project at the University of Oregon's business school. It was the brainchild of students Orion Falvey and Oliver Alexander. After graduating, they turned their ideas into a pilot project for rural health care.

Their proposal generated $5,000 in the Civil War Shark Tank business competition and at the Willamette Angel Conference. A crowd-funding site added $6,000. More support came in the form of $70,000 grant/loans from Lane County. Another $100,00 from three private investors got their clinic off the ground in Oakridge.

Falvey and Alexander at the time said they felt their operation could benefit other parts of the state after they identified up to 20 rural areas where more than two-thirds of rural residents' health care needs were not being met.

Orchid has since grown to operate three more clinics in Blue River, Fern Ridge, and Estacada from that small beginning in Oakridge. Since the Holiday Farm fire, Orchid has been providing services at a temporary site in Rainbow until a new Clinic is built.

That rebuilding process came into question following the Holiday Farm Fire, when it was discovered Orchid had insurance covering the contents of the building - but not the physical structure - according to Tim Laue, a former McKenzie Wellness board member. That's when a "lifeline" came to the rescue in the form of Oregon House Bill 5006, which he helped secure.

As part of wildfire recovery efforts, the Oregon legislature approved HB 5006 and approp-riated $1,800,000 to cover the costs of replacing the McKenzie Valley Health Clinic, with Orchid Health continuing as a tenant. The grant, which was accepted by the MVW in October of 2021, requires a replacement structure be built by July of 2023.

Val Rapp, president of MVW, said McKenzie Valley Wellness, "got a fair insurance settlement for the loss of our building."