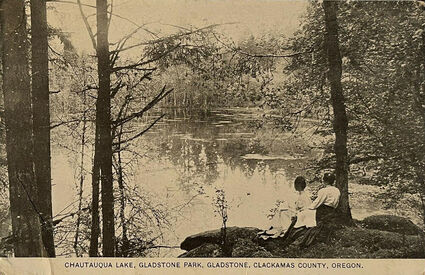 The grounds of the Gladstone Chautauqua included a large pond, which organizers of course named Chautauqua Lake.

The Oregonian summarized the whole movement as "a great university whose students are scattered in homes, on farms, in shops and factories ... wherever a human soul carries the love of learning."

A typical day at Chautauqua, circa 1899, started at 8 a.m. with prayers, calisthenics, and classes. Roughly 3,000 people attended on an average day, including some who camped there and many others who simply rode the trolley or electric railway from their nearby homes. At 11 a.m. would come the morning lecture, usually on a domestic topic (the crowd was largely women early in the day, as many working men couldn't come until after their shifts were over for the day).

The lecture was followed by lunch; then, at 1:30, more short lectures, followed by a band concert at 2 and a baseball game at 3:30. That got everyone through to suppertime, after which there would be another band concert, followed at 8 p.m. by a literary reading and, at 8:15, the main lecture of the day. The lights went out at 11.

The most popular lectures were on Bible scholarship, followed by literature, history, and science. Joaquin Miller gave a lecture on Oregon literature in 1897; nationally famous cartoonist Homer Davenport gave lectures on "Indian stories and stories of Oregon" and "The Power of Cartoon" in 1905; and Russell Conwall, founder of Temple University, came and delivered his famous "Acres of Diamonds" speech several times in Gladstone. Rabbi Stephen Wise, "America's Rabbi," was a featured speaker. So was Rev. W.W. Matthews, pastor of the Portland African Methodist Church. Booker T. Washington lectured at the Ashland Chautauqua, which also hosted John Philip Sousa and his band.

The Chautauqua movement arose with the Progressive Era, and it was a nearly perfect fit for that pre-war "producer society" version of America where the average person worked the land with horse and steel and got dressed up for church every Sunday. But as the 1920s got underway, Americans, jaded from war and seduced by technology, became increasingly oriented toward the things they could purchase to play and pose with rather than the life they could build through earnest toil, and the Chautauqua movement became a less perfect fit. As the decade wore on, attendance started dwindling. In 1925 the Gladstone Chautauqua started running a deficit. By 1929 the gulf between income and outgo was too wide to bridge with the charitable contributions of local businessmen, and the Chautauqua reluctantly closed its doors forever.

The campus was sold to the Seventh-Day Adventist Church, an organization that is especially strong in Oregon and that, like the Jehovah's Witnesses and Christian Scientists, actually carries a lot of the pre-war spirit of Chautauqua to this day. The church uses the campus as a campground and retreat center for its members.

Down in Ashland, the grounds were expanded over the years into what today is Lithia Park.

Could something like the Chautauqua movement flourish today? In one sense, the answer is pretty clearly yes. The Chautauqua movement showed the way for universities, especially state land-grant universities like (ahem) Oregon State University, to reach out and engage with learners in their own towns and communities rather than lurking behind podiums on far-distant leafy campuses. The result was a nationwide system of university extension, which has become almost as big a part of post-Great War rural America as Chautauqua was before. Between Extension and the continuing-ed classes offered by community colleges, the core educational functions of a local Chautauqua really never went away.

And the Internet has made resources like Coursera and the Khan Academy available, too, so that anyone who thirsts for knowledge can tap a fire hose of learning at any time.

But as for the whole "summer camp for grown-ups" model that Chautauqua represented, that has not come back. Which seems rather a shame, doesn't it?

(Sources: "Gladstone Chautau-qua: Education and Entertainment, 1893-1928," an article by Donald B. Epstein published in the Winter 1979 issue of Oregon Historical Quarterly; "Chautauqua in Oregon," an article by Joe Peterson published Oct. 26, 2021, in The Oregon Encyclopedia; "The Most American Thing," an article by Bruce Watson published March 20, 2020, in The Attic, http://www.theattic.space)