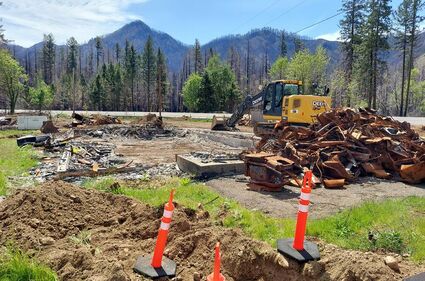 Little of the McKenzie River Clinic building in Blue River remained during cleanup operations in May of 2021.

From its start in 1977, the McKenzie River Clinic provided primary health care to the upper McKenzie River Valley. But in 2019 the organization's annual report explained that increased administrative costs, computer expenses, and equipment purchases - as well as changes to insurance reimbursements - had resulted in withdrawals of funds from the clinic's endowment at an unsustainable rate. The drawdowns from those reserves grew from $15,000 a year in 2013 to as high as $161,000 in 2017.

Although individuals had been donating from $40,000 to $50,000 a year, estimates were the clinic would need six times those amounts to stay in business. Citing priorities of keeping primary health care local and retaining the clinic's staff, the board approved a search for a potential partnership with a larger medical organization.

That search bore fruit when MVW sold the medical practice - including the furniture, equipment, and supplies - to the Orchid Oakridge Clinic. Orchid also operates clinics in Fern Ridge and Estacada. Since the Holiday Farm fire, Orchid has been providing services at a temporary site in Rainbow until a new clinic is constructed.

At the same time it got out of the primary health care business, the non-profit McKenzie River Clinic changed its name to McKenzie Valley Wellness. Recently, some people have asked who the MVW members are, possibly as a result of a misunderstanding about how health services are provided in the area, according to MVW president Val Rapp.

"Membership is based on past involvement through donating or volunteering," Rapp says. "We've kept members who didn't donate recently, as fire losses made it impossible for many to donate."

Only current members will receive the MVW membership list. "Members who requested the list should have it by Tuesday, April 5th," she says. "They are prohibited by law from publishing, online or otherwise, the list. They are allowed to use the list only for specific, limited reasons, and were advised on that law when they got the list. MVW will take it very seriously if anyone violates those laws, as it would violate people's privacy."

Plans are moving forward to build a new $2 million clinic in Blue River, roughly around the same time the O'Brien Memorial Library and the Blue River Fire station - tentatively targeted for 2023.

"MVW got a fair insurance settlement for our clinic that burned - a 1970s-era clinic that was too small and built before computers and Internet. Just like the library and fire department, we are very glad to get the state funding to build back better than we had before," Rapp says.

"In the first year after the fire, we all pitched in to keep essential services going, clean up, and figure out how to rebuild a vibrant, thriving community," Rapp says. "Conflict tears us apart when we need to work together on rebuilding."

The annual meeting is scheduled for 7 p.m. on Tuesday, May 3rd, at the Upper McKenzie Community Center, 54745 McKenzie River Drive in Rainbow. People can also attend remotely via Zoom, by contacting Rapp at 541-914-2370 for the log-in information.

Donations or requests for membership applications can be sent to McKenzie Valley Wellness, POB 381, Blue River, OR 97413.