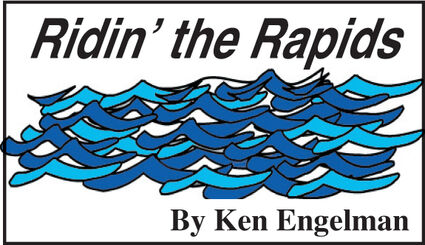 Every year when the first of April rolls around I can always count on getting a number of phone calls. Sometimes they're from people upset because they couldn't find Page 9 in an 8-page edition. Others might be upset at extravagant government spending after reading about plans to replace the Goodpasture Bridge with an underwater tunnel or some such scheme.

People who've read this newspaper for a while know what I'm getting at - the annual April Fool's edition. There are a few who hate it but most cut me some slack and allow a once-a-year indulgence in the slightly absurd.

There were a lot more calls this year. They were the result of my coming came face-to-face with the reality that COVID has not left the scene.

I didn't catch it but the crew in Albany that runs the press Reflections is printed on did. That put me into a scramble to find another company running a web press that could also plug this paper into their schedule at a moment's notice.

Luckily a printer in McMinnville did but needed me to finish last week's edition 24 hours earlier. There were more details involving addressing for subscribers and sorting bags for the Post Office. It all worked in the end but meant papers weren't on the news stands last Wednesday and mail subscribers didn't receive their copies on Thursday, as they've become accustomed to.

Unfortunately, our normal press crew is still not able to go back to work. That means there will be similar this week.

And that's no April Fool's.